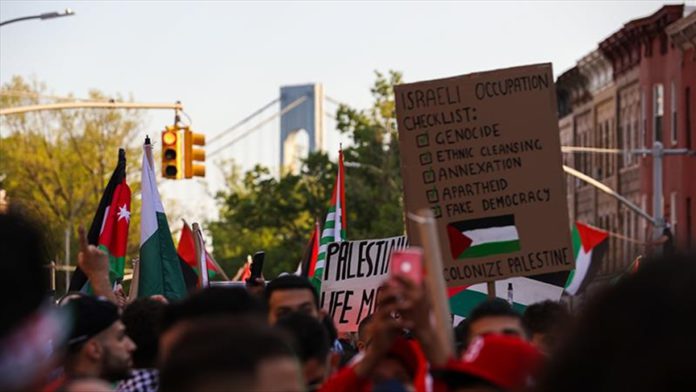 Thousands of demonstrators in Washington, DC and New York City rallied Saturday in solidarity with Palestine and to protest Israel for attacks on Gaza.

In the US capital, demonstrators gathered at the Washington Monument, carrying Palestinian flags and signs in support of Palestine, chanting “Free, Free Palestine.”

The crowd protested the US administration that has remained silent on Israeli attacks in Palestine. Later they marched to the US Congress building that houses the House of Representatives and Senate offices.

Demonstrators called on the Joe Biden administration to halt military support for Israel.

The three-hour protest remained peaceful and coincided with the 73rd anniversary of Nakba, or Great Catastrophe.

Nakba, the symbol of forced migration and massacres for millions of Palestinians who have lived in exile for decades, expresses an unrelenting pain for more than seven decades after they were forcibly evicted from their lands.

Brooklyn, New York was the focal point of pro-Palestine protests that was attended by thousands with Muslim and human rights groups joining hands.

Orthodox Jews were also present at the rally.

Israeli airstrikes on Gaza since May 10 have killed nearly 150 people, including women and children, and injured more than 1,200.

Air raids on Gaza were preceded by days of tensions and Israeli aggression in occupied East Jerusalem, where hundreds of Palestinians were assaulted by Israeli forces and settlers at the Al-Aqsa Mosque and in the Sheikh Jarrah neighborhood.

Tensions spread from occupied East Jerusalem to Gaza after Palestinian resistance groups there vowed to retaliate for Israeli assaults if they were not halted.