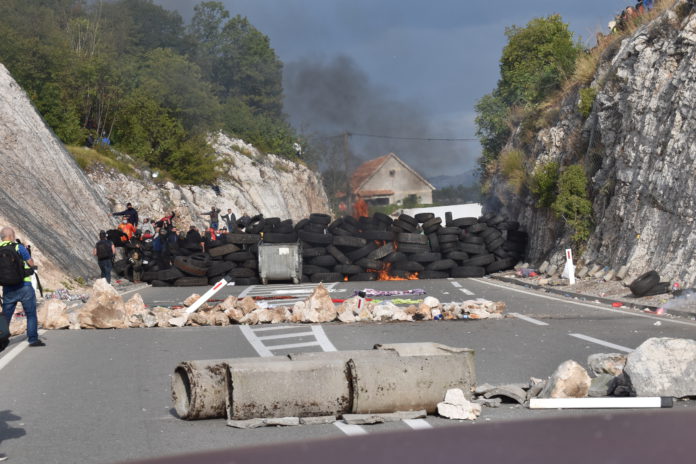 Thousands of protesters in Montenegro clashed on Sunday with riot police in the city of Cetinje, the country’s former capital, over the inauguration ceremony of the new head of the Serbian Orthodox Church.

The Serbian Church, which does not recognize the legitimacy of the Montenegrin Church and does not see its members as Christians, chose Montenegro’s former capital for the ceremony, causing reactions from Montenegrin nationalist circles in the country.

People from several cities across the country gathered and blocked the roads to Cetinje to prevent the arrival of the Serbian Orthodox Church’s (SOC) patriarch and clergy at the enthronement ceremony of Metropolitan Ioannicius of Montenegro at the Cetinje monastery.

Trying to open the Podgorica-Cetinje road, which was blocked with tires, containers, and stones, security guards called on protesters to disperse and intervened with tear gas and water cannons.

Prime Minister Zdravko Krivokapic said on social media that Veselin Veljovic, the security advisor to President Milo Djukanovic, who opposes holding the ceremony in Cetinje, was detained during the protest in Cetinje.

There are two Orthodox churches in Montenegro, one Serbian and one Montenegrin. The Serbian Orthodox Church, which is also influential in the country’s politics, called on citizens to support the opposition in the last parliamentary elections.