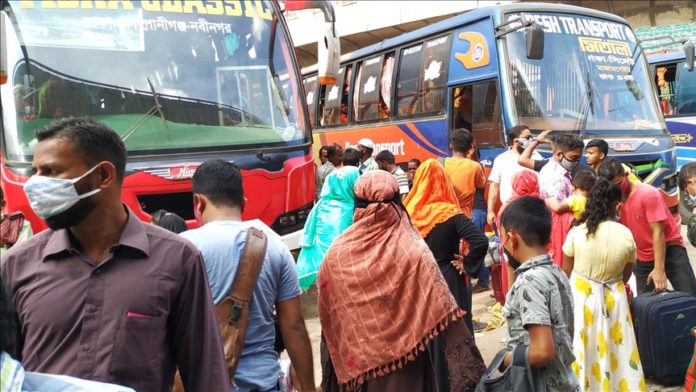 Motivated by a longstanding tradition, tens of thousands of Bangladeshis are leaving urban areas of the country including the capital Dhaka for villages to celebrate the Muslim Eid al-Adha festival with their loved ones while flagrantly violating pandemic-related restrictions.

Thursday was the first day after the country began easing a strict lockdown so businesses and trade could run smoothly and people could travel easily ahead of Eid al-Adha, or the “festival of sacrifice,” which is celebrated by Muslims around the world as a commemoration of Prophet Ibrahim’s willingness to sacrifice his own son for God, with cows, goats and sheep traditionally slaughtered.

In the wake of an alarming spike in global coronavirus cases with the deadly Delta variant of the virus, which has already hit neighboring India, Bangladesh has been enforcing tougher restrictions nationwide to stem the spread of the virus since July 1 with the deployment of the army.

According to reports from Dhaka’s main Kamalapur Railway Station, Sayedabad Bus Terminal and Sadarghat Boat Terminal (popularly known as Sadarghat Launch Terminal), people were found to be in a mad rush to travel to their hometowns with little care for COVID-19 health rules.

Although a good number of people were wearing face masks, most of them did not care about social distancing at all, and many were not covering their face properly.

Many were also seen traveling with their children but not observing health protocols.

It was also impossible to maintain social distancing in places like the Sadarghat terminal due to the huge number of travelers.

Bangladesh has registered 17,278 fatalities from the coronavirus, with 226 new deaths reported in the past day, according to the government’s latest update released Thursday.

The number of cases in the country has surpassed 1.07 million with 12,236 new cases recorded while nearly 906,000 people have recovered from the virus since it was first detected in March last year.

Tahmina Khatun along with her two children was traveling by train to the northern border district of Netrokona to celebrate Eid with her parents.

“After more than six months, I’m going to my rural home. My kids have been suffering for a long time and they need a new environment,” she told Anadolu Agency.

Like Khatun, many others are taking the risky journey despite an alarming increase in cases and deaths.

Khodeza Begum, who is nearly 80 years old, was sitting in a corner of the train with one of her sons.

“I was with my son in Dhaka and I’m now going to the village to meet my other relatives to enjoy Eid together,” she said.

People of all ages also rushed to the city’s bus terminals to travel to their villages, while many passengers were seen not following health rules.

Meanwhile, social distancing was mostly ignored at water terminals, with vessels heading to the country’s southern regions full of people.

More than 100,000 people from the southern coastal areas usually leave Dhaka daily via the waterway during the festival.

“I’m going to my home with my family sitting on the open deck, as this is the cheapest way to reach my home,” said Mohammad Habib, who hails from southern Barguna district.

About the pandemic risks, he said: “Allah will protect us. I do not think of celebrating Eid in Dhaka leaving my old parents in the village.”

The National Technical Advisory Committee on COVID-19 expressed concern Wednesday over the government’s easing of the nationwide lockdown.

The committee also issued a series of recommendations, including setting up Eid cattle markets in open areas instead of in city areas to curb the spread of infection, ensuring social distancing and health guidelines everywhere and not allowing people aged 50 or older to visit cattle markets.

The committee also encouraged people to celebrate Eid at the places where they are currently residing and urged people to take advantage of the digital cattle market.

Speaking to Anadolu Agency, Dr. Nahiduzzaman Sazzad, who works at a private hospital in Dhaka, said that despite an ongoing vaccination drive, it would be challenging for the government to curb the next wave of the pandemic due the violations of health restrictions during the Eid journey.

Meanwhile, Health Minister Zahid Maleque on Thursday assured that the government currently has 4.5 million doses of COVID-19 vaccines on hand.

“Another 15 million doses will reach the country in shipments every month, so there will be no problem from now on to run mass vaccination drives,” he said.

Maleque also said a process was underway to recruit 2,000 medical doctors and 4,000 nurses to deal with the COVID situation.

“All citizens above 18 years old will be brought under the vaccination program soon,” he added.

Currently, residents aged 35 years and above are eligible for COVID vaccination.

To date, Bangladesh has administered 11 million vaccine doses, including first and second doses, while more than 10 million people have registered for vaccination.