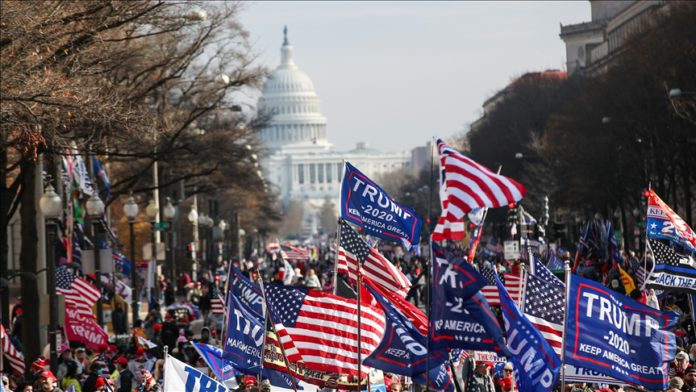 Thousands of people on Saturday gathered in the US capital of Washington, D.C. in support of President Donald Trump for a second time over the Nov. 3 presidential election’s results.

The supporters gathered at Freedom Plaza, about one block from the White House, which has been a focal point for most demonstrations for the “March for Trump” rally, days before Electoral College votes are cast to declare the nation’s 46th president.

The protesters, joined by hundreds of the white supremacist militia group the Proud Boys, carried American flags and banners that read “We support you Mr. President,” and “Stop the steal”.

The crows sang “The National Anthem” and chanted “Trump” as Marine One carrying the president flew over the “March For Trump” rally at Freedom Plaza.

From there, demonstrators made their way toward the Supreme Court, where Trump’s former National Security Adviser Michael Flynn made his first public appearance after the president pardoned him last month.

“The courts aren’t going to decide who the next president of the United States is going to be. We the people decide,” said Flynn to the demonstrators.

The first mass rally was held on Nov. 15, during which tens of thousands of people marched under the “Million MAGA March,” “The March for Trump” and “Stop the Steal DC” rallies.

Trump continues to challenge election results and claims electoral fraud and irregularities but authorities have said the 2020 elections were the most secure in history.

“WE HAVE JUST BEGUN TO FIGHT!!!” Trump tweeted all in capitals as his supporters gathered for the rally.