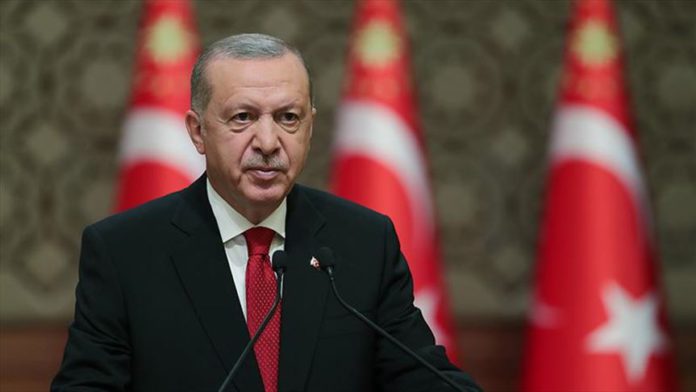 No matter how much the terror groups FETO and the PKK plot against Turkey from within or without, they cannot silence our prayer or lower our flag, said Turkey’s president Wednesday, on the fourth anniversary of a defeated coup.

On the night of July 15, 2016, the Fetullah Terrorist Organization (FETO) “tried to shackle this freedom-loving nation, thank god they could not succeed,” Recep Tayyip Erdogan said in his address to the nation marking July 15, Democracy and National Unity Day.

The public opposition to the coup bid that night proved “that each individual of our nation can become an invincible hero for the adhan [call to prayer], flag, freedom, and the future,” he added, stressing that the nation frustrated those who want to “put the national will under their feet.”

The defeated coup tried to invade the country, using terrorists in the army as a miserable betrayal, but this coup bid only fueled the country’s patriotic determination, he added.

Turkey is “not finished yet, this nation has many words to say, many projects to implement. This state has a lot of potential to motivate,” he added.

FETO and its U.S.-based leader Fetullah Gulen orchestrated the defeated coup, which left 251 people martyred and nearly 2,200 injured on July 15, 2016.

In its more than 30-year terror campaign against Turkey, the PKK – listed as a terrorist organization by Turkey, the U.S. and the EU – has been responsible for the deaths of 40,000 people, including women, children, and infants.