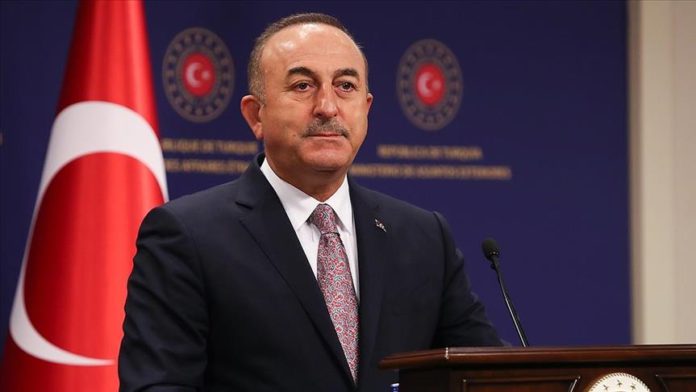 Turkey’s foreign minister said Thursday the agreement to end the war over the disputed region of Nagorno-Karabakh will have a positive impact on regional stability.

“We call on the other members of the Minsk Group, and especially the co-chairs, to refrain from politically motivated actions that would undermine the path to a negotiated solution,” Mevlut Cavusoglu told the 27th Meeting of the OSCE Ministerial Council via videoconference.

Recalling that Turkey has always acted in line with international law and legitimacy, Cavusoglu stressed that the country, as a member of the Minsk Group, is committed to supporting all efforts to find a lasting solution to the Nagorno-Karabakh issue.

“Now with the latest agreement between Azerbaijan, Armenia and Russia, after 30 years, there is a real chance of peace. The course will have a positive impact on relations between Armenia and Azerbaijan and Armenia and Turkey as well as regional stability,” he noted.

He added that the solution must be based on the sovereignty and territorial integrity of Azerbaijan.

During the conflict, Azerbaijan liberated several cities and nearly 300 settlements and villages from Armenian occupation.

Touching on the latest situation of Crimean Tatars, Cavusoglu said human rights violations in Crimea and the situation of Tatars continue to be alarming.

He said that just as Turkey supported Azerbaijan’s efforts in achieving independence for Nagorno-Karabakh, it also supports Ukraine in the matter of Crimea.

Stressing that the OSCE has an important role in resolving the Crimea issue, he noted that the OSCE Special Monitoring Mission to Ukraine is fulfilling an important task under the leadership of Ambassador Halit Cevik, the chief monitor of the mission.

Turkey as well as the UN General Assembly viewed the annexation as illegal.

– ‘Need for balance between respect for religion and freedom’

Speaking on rising trends, Cavusoglu highlighted that populism, xenophobia, anti-Islamism, anti-Semitism and the rise of right and left extremism pose a threat to democracy, fundamental values such as human rights and freedom of expression and religion.

“Nothing can justify insulting our Prophet [Muhammad]. Political leaders have a special responsibility in this regard,” he said, adding there is need for the right balance between freedom and respect for religion.

He went on to say that the need for the right balance should also be prioritized on the OSCE’s agenda.

During his speech, Cavusoglu also warned the group about the Fetullah Terrorist Organization (FETO), noting that terrorist organizations target democracies by transforming themselves and diversifying their activities to make themselves look appealing.

“Unfortunately, we see that this is also happening in the OSCE platform. The participation of FETO members in [the OSCE’s annual] Human Dimension Implementation Meetings is a major source of concern for Turkey,” he stressed.

This is also a violation of OSCE rules governing civil society participation,” he added.

FETO and its US-based leader Fetullah Gulen orchestrated the defeated coup of July 15, 2016 in Turkey which left 251 people martyred and nearly 2,200 injured.