TurkishPress
Home National ‘There is no mutated virus originated in Turkey’ 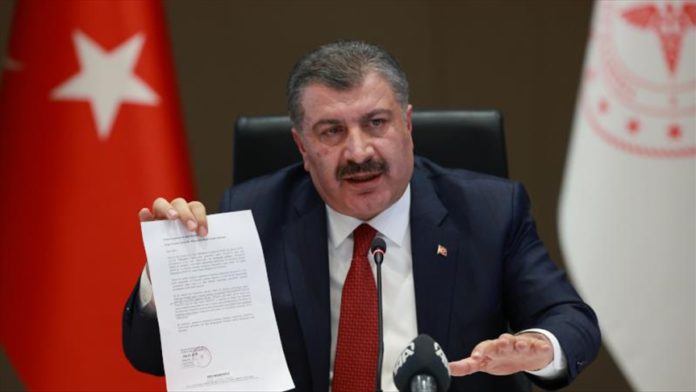 There is no new coronavirus variant that originated in Turkey, while the rate of infections related to the UK strain is rising in the country, the country’s health minister said on Thursday.

“One Brazilian, 49 South African variants of the coronavirus have been recorded in Turkey so far,” Fahrettin Koca told a news conference in the capital Ankara following the meeting of the Coronavirus Scientific Advisory Board.

He warned all citizens about the mutated virus as the infections are increasing day by day in the country.

Drawing to the ongoing mass vaccination campaign, Koca said Turkey is approaching the end of the first stage of the drive, with over 8 million people, including nearly 1.5 million having received the second dose, vaccinated so far.

“Turkey will have 105 million doses of coronavirus vaccine by the end of May at the latest,” he said, adding that the country will initially receive 800,000 doses of the BioNTech vaccine out of 4.5 million in 10 days, and efforts will be put to raise it to 5 million doses in total.

There is no supply or planning problem in the vaccination process and the second doses for all who have received the first dose of the vaccine are guaranteed, Koca said, pointing out that Turkey is among the countries that have been fighting against the virus successfully.

To avoid a possible supply problem, it is necessary to domestically develop a COVID-19 vaccine, the health minister stressed.

On Turkey’s work to develop a local COVID-19 vaccine, Koca said the phase two trials may end in April and the country may advance to phase three in late April.

He also underlined that they aim to complete the vaccination campaign in April and May at the latest.

Koca also rejected the opposition party’s claims that Turkey gets vaccines from China for free.

“In a world where there is a war for vaccines, would a manufacturer company donate vaccines to a country for free, is there a rational explanation for this?” he asked.

“I underline, under no circumstances has an additional amount of money been given to the intermediary firm,” he said.

“We are now in a period prioritizing the normalization and the effects of the pandemic on social life, it is a period of taking on-site decisions,” he said.

Touching on the increasing numbers of infections in some provinces, he said that the country will start to take measures based on the on-site decisions depending on the number of cases in provinces.

According to the parameters the provinces will declare their risk levels as low, medium, high or very high risk.

Over a question about complete lockdown in very high-risk cities, Koca said: “In this sense, we do not think about a complete lockdown right now, but as we all see the cases are on the rise every day,” calling on the citizens to follow the measures strictly.

Turkey on Thursday reported 9,572 more coronavirus cases, including 658 symptomatic patients, according to the Health Ministry.

The country’s case tally passed 2.67 million, while the nationwide death toll reached 28,358, with 73 fatalities over the past day.

The total number of recoveries over 2.54 million and more than 32.81 million coronavirus tests have been conducted in Turkey the country to date.

On Jan. 14, Turkey began a mass COVID-vaccination campaign, starting with healthcare workers along with top officials to encourage public confidence in the vaccines.

Since last December, Turkey has been implementing curfew on weeknights and a full weekend curfew to curb the spread of the virus.

Last week, Koca announced that Turkey will start to gradually normalize from coronavirus restrictions as of March 1.

The pandemic has claimed some 2.5 million lives in 192 countries and regions since it originated in China in December 2019.

Over 112 million cases have been reported worldwide, with recoveries now nearing 63.6 million, according to figures compiled by the US’ Johns Hopkins University.