TurkishPress
Home National There is no immigration crisis in Turkey: official 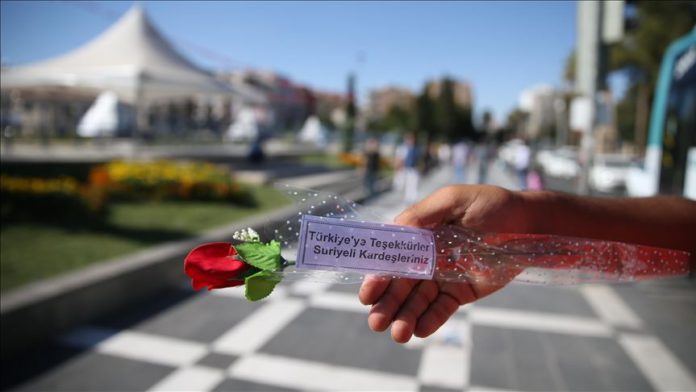 There is no immigration crisis in Turkey; there is an issue, but the country is successfully managing this together with all its institutions, the general director of the country’s immigration authority said Tuesday.

“Migration is not just an issue in our country or in our geography…Very different migration movements take place in the east, west, north and south of the world for different reasons,” said Abdullah Ayaz in a live broadcast on the International Migration Film Festival’s Instagram account.

Reiterating that there are more than 270 million migrants, nearly 70 million forcibly displaced people and over 25 million refugees around the world, Ayaz said the festival is a good opportunity to present the issue to the world.

“Unless we eliminate the causes of migration, both we and the different parts of the world will face an immigration issue,” he said, adding some people see migration as an arbitrary movement of people.

Responding to a question on the success of the festival, he said it has achieved its purpose very well so far.

Touching on the migration situation in Turkey, Ayaz said 3.6 million Syrians have come to Turkey since 2011 while the county saw a total of 2 million migrants from 1923 to 2011.

“Turkey hosts the largest migrant population in the world…The country has successfully managed the issue since the beginning of the Syrian crisis in 2011. Our society deserves the greatest thanks in this regard,” he added.

Described by its organizers as the “largest and most comprehensive thematic film festival in the world,” the event has attracted a great amount of attention.

A total of 45 films from 30 countries are available for viewing online free of charge and 40% of the films have been reserved since midnight on June 13.

The movies are available during the June 14-21 festival via www.festivalscope.com through a subscription.

Films can be booked for 24 hours, and if they are not viewed, the ticket is deleted from the booker’s list and is reactivated for another movie lover.

The festival aims to stress that “migration has been a common story experienced by all nations throughout history” and to raise awareness on the issue, according to its organizers.

With Anadolu Agency as its global communications partner, the festival is supported by Turkey’s Culture and Tourism Ministry and organized by the Interior Ministry under the auspices of the Turkish Presidency.

May 22, 2020
We use cookies to ensure that we give you the best experience on our website. If you continue to use this site we will assume that you are happy with it.Ok