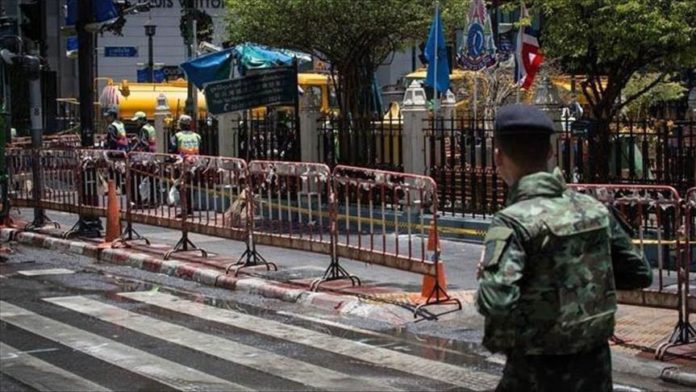 A coalition of Thai youths, students and political activists has staged a series of protests since mid-July which has become the largest rally in the country since a military coup in 2014.

The nationwide movement initially called for the resignation of Prime Minister Prayut Chan-o-cha and demanded the dissolution of parliament and freedom to criticize the government.

Prayuth is also a former military chief who led the coup six years ago.

But the rally has now escalated to more sacred territory, with protesters demanding reform of the monarchy.

Last week, some 4,000 protesters took to the streets of Bangkok and read out a list of demands for the monarchy, including abolition of the strict “lese majeste” law that protects the king from criticism.

Speaking to Anadolu Agency on Tuesday, Thai political expert Noi Thamsathien said the anti-government protests emerged as most people saw Prayuth’s government as a continuation of the military rule coming right after the coup, “during which time the military had originated several initiatives that in effect changed the political system in a way that people saw as making Thailand’s position far from a democratic one,” he said.

Thamsathien noted that the constitution drafted during Prayuth’s time as the head of the military junta government enabled the military to stay in power through a number of newly laid down conditions within the constitution, including the creation of appointed senators, “which means they have a large number of votes already in their pockets to start with.”

“It enables the governing parties to win just about anything they want in parliament,” he added.

Under the 2016 charter, the 250-strong regime-appointed Senate will serve a five-year term. Its first task is a joint sitting with the new House of Representatives to vote for a new prime minister.

In May 2019, the King of Thailand approved a list of 250 senators appointed by the junta, including 66 army generals.

On June 5, the 750-member parliament, including the senators handpicked by the junta government, voted 500 to 244 to appoint Prayuth as prime minister.

Thamsathien said protesters were also angered by privileges attached to those who work for the government, which for most people failed to work in a straightforward manner to deliver equality under the same laws.

“A politician, for example, managed to stay on in the Cabinet despite the fact that he was convicted and jailed in Australia in the past for drug offenses,” he said.

The government, he said, has been criticized for not being able to produce any good initiatives to remedy basic problems but is seen doing the opposite for the poor, like taking away their resources for big projects or chasing vendors off the streets.

“The junta and the government promised a cleaner, corruption-free administration, but it is seen to be doing the opposite,” added Thamsathien.

Last month, Thailand recorded its largest economic contraction in 22 years, deepening the country’s recession as it struggled against the coronavirus pandemic.

The National Economic and Social Development Council said the nation’s gross domestic product shrank 12.2% from a year earlier, its biggest decline since the 1998 Asian financial crisis.

Emphasizing that the youth movement is still growing and gathering support, Thamsathien said the protesters seemed to pin their hopes on the representatives they support in parliament taking their demands forward.

“The main demand so far is to amend the constitution, which is the culmination of the problems,” he added.

Zahri Ishak, a Thai human rights activist from the NGO Bicara Patani, said it is hard for democratization in Thailand to work optimally as the military maintains a firm grip on power.

This, he said, has left the parliament with no power to carry out democratization in the country.

“The real ruler is the military, despite the existence of parliament,” Ishak told Anadolu Agency.

He also highlighted the disappearance of Thai activists abroad who still remain missing.

According to Human Rights Watch, at least nine Thai activists have disappeared abroad since 2014.

“There are cases of missing Thais abroad that cannot be prosecuted because Thailand doesn’t have a law on missing persons,” he said.

Ishak added that for democratization in Thailand to work, the government needs to listen to public opinion and open channels for political expression.

– Learning from movements in region

Speaking to Anadolu Agency, Awani Irewati, a researcher from the Indonesian Institute of Sciences, said Thai youths learned a lot from other political movements in the region, including Indonesia.

Irewati noted that the characteristics of democracy are openness and freedom of expression, especially in today’s digital era.

“They don’t close their eyes to developments in Indonesia and Myanmar,” she continued.

Highlighting Indonesia’s history of clashes initiated by students and military forces in its New Order era, Irewati said students measure the level of democracy in their country.

“They must have also questioned democracy in Thailand because there is no room for dialogue,” she added.