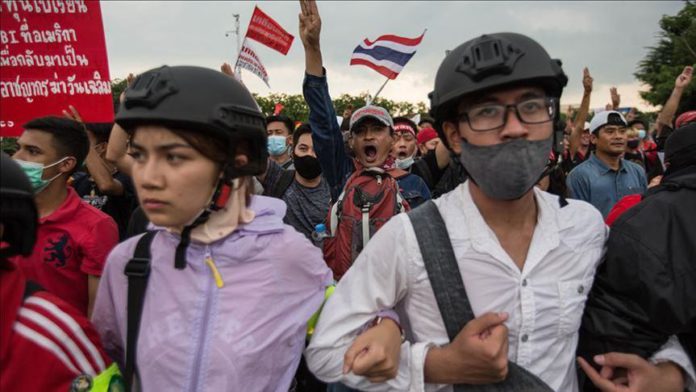 Thailand’s pro-democracy groups continued protests in the capital Bangkok on Friday despite a ban on demonstrations under new emergency measures.

Thousands turned out for the rally by pro-democracy group Khana Rassadorn at the Pathumwan intersection, the busiest commercial area in the capital.

The location was chosen after authorities closed down the Ratchaprasong area, where tens of thousands of protesters had gathered on Thursday night.

Protesters are demanding the resignation of Prime Minister Prayut Chan-o-cha, who has refused to stepped down, and the release of detained demonstrators.

Rights group Thai Lawyers for Human Rights said in a statement that 51 people were arrested during this week’s protests.

Meanwhile, police have warned that anyone taking part in the demonstrations or posting messages online will be arrested under the emergency decree imposed on Thursday.

The decree bans gatherings of five or more people and publication of news or online messages seen as a threat to national security.

At a news conference in Bangkok, Yingyot Thepjamnong, a police spokesperson, said security forces are working to tighten law enforcement against Bangkok protesters who break the law.

“Protests cannot be organized. The police will take legal action. Violators must be prosecuted,” he said.

Since July, Thailand has been gripped by mass protests calling for the resignation of premier Chan-o-cha, who is a former army chief.

Protesters have also called for reforms to the monarchy, dissolution of the parliament, and freedom to criticize the government.