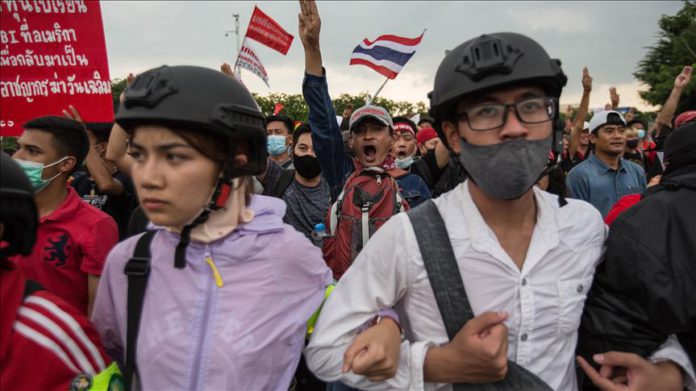 The government also banned the publication of news or online messages that could harm national security under an emergency decree, according to daily Bangkok Post.

“It is extremely necessary to introduce an urgent measure to end this situation effectively and promptly to maintain peace and order,” the daily quoted the state television as announcing.

Shortly after the government order, police removed the protesters’ camps from outside the Government House and arrested many protest leaders.

Earlier, police arrested 21 protesters during a Tuesday’s rally in Bangkok for giving a three-finger salute — a gesture to show solidarity against a dictatorial military-led government.

On Wednesday, hundreds of protesters, led by activist Arnon Nampha, gathered in Thailand’s Democracy Monument in Bangkok on the 47th anniversary of the revolution that overthrew the military-backed government, urging for resignation of Prime Minister Prayut Chan-o-cha and his government, a new and more democratic law, and reforms to monarchy.

The demonstration was organized by student networks, including the Free Youth Movement and the United Front of Thammasat and Demonstration, which have been protesting against Prayut’s rule for the last three months.

Since July, Thailand has been gripped by mass protests demanding the resignation of Chan-o-cha, who is a former army chief.

The movement called for reforms to the monarchy, resignation of the prime minister, dissolution of the parliament, and freedom to criticize the government.