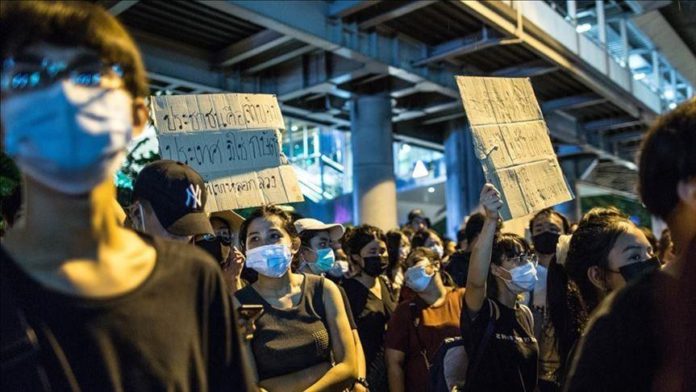 Clashes erupted between the protesters and the police on Sunday evening when hundreds of pro-democracy Thai youth were marching toward the 1st Infantry Regiment in Bangkok, where Prime Minister Prayut Chan-o-cha lives.

At least 10 protesters and 23 police officers were injured in the clashes, according to the local daily Bangkok Post. One police officer on duty also died due to cardiac arrest.

The police fired rubber bullets, water cannon, and used tear gas against the protesters when they were trying to cross the barrier and move closer to the premier residence.

Deputy Chief of the Metropolitan Police Bureau Maj. Gen. Piya Tawichai said they have arrested 22 people behind the protest rally.

Charges to be pressed against them included violation of the emergency decree on Covid-19 prevention, and damaging public property, the daily quoted Tawichai as saying.

The protesters were also chanting slogans against the military coup in Myanmar and showing support for anti-coup demonstrators in the neighboring country.

But the pro-democracy campaign lost momentum when Thailand was struck by a second wave of COVID-19.