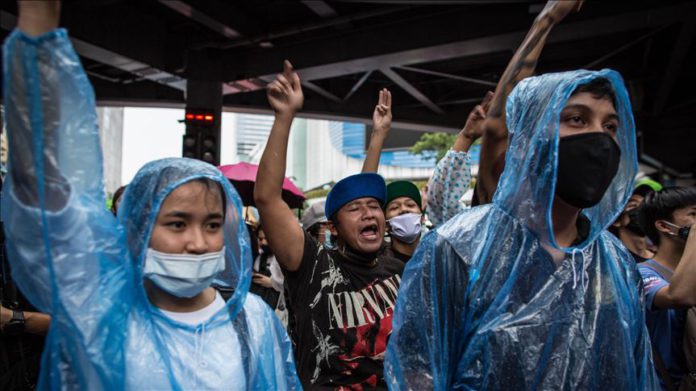 The rallies, organized by the pro-democracy group the United Front of Thammasat and Demonstration (UFTD), have expanded to areas outside the capital Bangkok including Maha Sarakham, Khon Kaen, Buriram, Chachoengsao, Nakhon Pathom, Nonthaburi, Chiang Mai, Lamphun, Phetcabhuri and Songkhla.

The UFTD also called for a new democratic constitution without any intervention from the government or royal institutions.

“We demand monarchy reform. Do not extend royal power beyond the borders of democracy,” it said in a statement.

The call came as the Thai government ordered national broadcasting regulators Monday to take down content by four media outlets and the Facebook page of a protest group.

The targeted media sites were Voice TV, Prachatai, The Standard and The Reporters.

The order said some of their reports violated the Emergency Decree, which bans the broadcasting of information that affects national security and the “good morals” of the people. However, it did not specify which news reports were problematic.

Meanwhile, their representatives insist that they did not break any laws and would continue to their operations.

There was no immediate response from the National Broadcasting and Telecommunications Commission.

“The government supports the parliamentary session to discuss and find ways to de-escalate the conflict,” he said Monday.

He brushed off speculation about government plans to impose a curfew and expand a state of emergency to other areas outside Bangkok.

Parliament is now in recess and will not return for the next session until the first week of November.

Commenting on the ongoing protests, Prayut stressed that the government has been taking a compromising stand towards the protesters.

“However, the government is obliged to protect the monarchy,” he added.

Thailand has been gripped by mass protests for the past three months calling for the resignation of the premier, who is a former army chief.

Protesters have also called for reforms to the monarchy, the dissolution of parliament and freedom to criticize the government.

EIA revises up Brent price forecast by $4 for 2020

8 killed in clashes in Taiz province in Yemen

November 27, 2019
We use cookies to ensure that we give you the best experience on our website. If you continue to use this site we will assume that you are happy with it.Ok