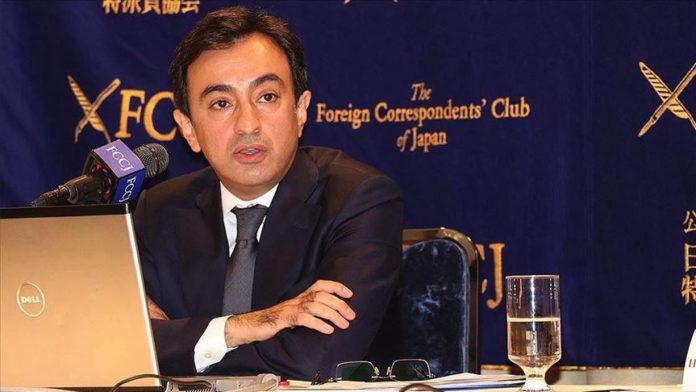 As fighting continues in Upper Karabakh, an Azerbaijani envoy claimed on Wednesday that terrorists from Middle Eastern countries have been recruited into the Armenian army.

“We have evidence that many Lebanese and Syrians terrorists are fighting against Azerbaijan along Armenia,” Gursel Ismayilzade, the Azerbaijani ambassador to Japan, told a panel discussion Wednesday.

Upper Karabakh, or Nagorno-Karabakh, an internationally recognized territory of Azerbaijan, is under Armenian occupation since 1991.

Underlining that Pashinyan called for the region to be united with Armenia, signaling a “new war for a new region,” the envoy said potential negotiations are jeopardized with such an approach.

Also speaking at the panel discussion, Hasan Murat Mercan, the Turkish ambassador to Tokyo, said Turkey-Azerbaijan relations are in the context of “one nation, with two states” due to strong cultural and historical ties between the two Turkic countries.

Stressing that Turkey is not a party to the Karabakh conflict, Mercan said Azerbaijan has the right to take back its lands within the framework of international law.

“Turkey supports Azerbaijan politically and morally, and will continue to do so. But it will never become part of the military conflict,” he said, adding that the dispute threatens regional security.

Last week, Armenia targeted civilians visiting a graveyard in the western city of Terter, killing four and injuring as many.

A second cease-fire went into effect Oct. 17 after the Oct. 10 truce — meant to allow an exchange of prisoners and the recovery of bodies — was breached by Armenia.

China in 'close' contact with India on resolving border issues