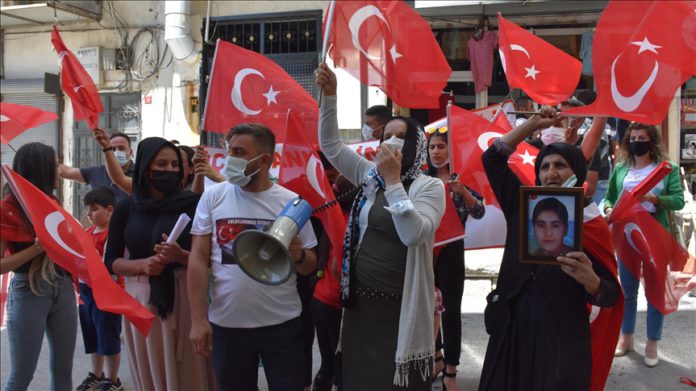 Families of children abducted or forcibly recruited by the PKK terrorist organization continued their protests this week in southeastern Turkey on Friday.

The families, along with people who have lost relatives to the PKK’s terror attacks, gathered at a protest camp outside the office of the opposition Peoples’ Democratic Party (HDP) in Turkey’s southeastern city of Hakkari.

The group marched towards the HDP building holding Turkish flags and banners saying: “PKK will lose, mothers will win.”

This was the 12th week of the demonstrations, as families react to the terror group PKK and HDP with their protests. The Turkish government says the HDP has links to the PKK terror group, and prosecutors have filed suit with the nation’s highest court to shut the party down.

Leyla Ciftci, whose relative was abducted by PKK, said they were protesting to be reunited with their children and make their voices heard.

Calling on the HDP to return their relatives and children abducted by PKK, Ciftci said: “Together with all the mothers on the watch for their children, we say: ‘End’ to terrorism. The PKK will lose, the mothers will win.”