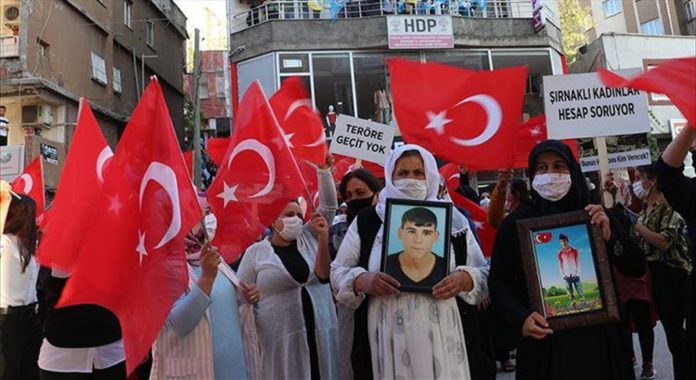 Kurdish mothers whose children were abducted, families who lost their loved ones in terrorist attacks and families of martyrs and veterans of Turkey’s war on terror staged a protest Thursday in Sirnak province in southeastern Turkey.

They gathered in front of the provincial headquarters of the Peoples’ Democratic Party (HDP), which is accused of having links to the YPG/PKK terrorist organization.

The families carried photographs of their children abducted by the terrorists and banners that read “Women in Sirnak call terrorists to account” and condemned terrorist organizations.

Hamdiye Aslan, a mother whose 14-year-old son was abducted by terrorists five years ago, said they will continue their protests every week demanding their children back from the HDP.

“They took our children away. We want them to bring them back,” she said.

“I’ve been yearning to see my son’s face, to hear his voice for five years. How can they [the terrorists] ever pay for what they did?”

Esra Birlik, whose father was martyred by PKK terrorists 31 years ago, said she grew up as an orphan and wanted the mothers’ tears to dry.

“This country, this flag belong to all of us. We are all brothers and sisters. What is it that we cannot share? We will fight for out martyred ones and our flag,” she said.

The demonstrators condemned both the PKK and the HDP and expressed their support for Turkey’s anti-terror operations.

*Writing by Ahmet Gencturk and Dilan Pamuk in Ankara