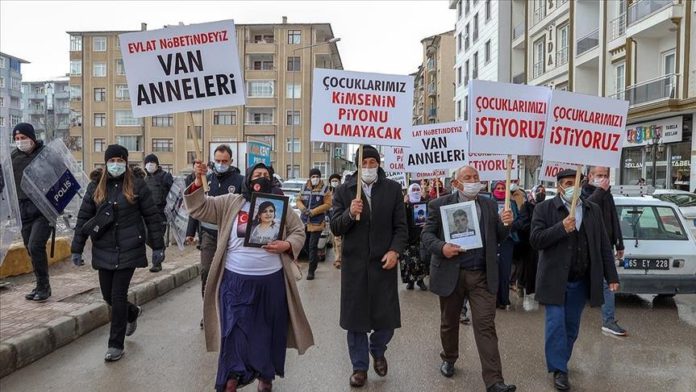 Relatives of those forcibly abducted and recruited by the PKK terror group held protests outside the provincial office of the Peoples’ Democratic Party (HDP) in eastern Van and Hakkari provinces.

They said the HDP is complicit in the disappearance of their children.

Ten families gathered on Cumhuriyet Avenue in Van and walked toward the HDP office carrying banners that read: “Mothers of Van on child-watch,” “Enough is enough, let us be!” and “We want our children back.”

Protester Atiye Dayan said her daughter Silan was tricked into joining the terror group in 2015 and her child was supposed to study and go to school but the PKK gave her a weapon.

Nazli Sancar said all parents ever wanted was to reunite with their children. She encouraged her daughter Seyma to surrender to security forces.

In Hakkari, families have been gathering for the past four weeks. They walked to the provincial HDP office to demand the return of their children.

Leyla Ciftci said families held protests to be heard as the women victimized by the PKK’s forced recruitment.

Ciftci said everyone should be aware of the true colors of the PKK and mothers should unite to bring back their loved ones. “We want our children from the HDP,” she said.

Stressing that the PKK would eventually lose and mothers would triumph, she said the group would keep protesting until they are reunited with all of those who were abducted.

Aysun Adiyaman brother was abducted at the age of nine. She said terror affiliates were responsible for tricking children and taking them to mountains where they were given military training.