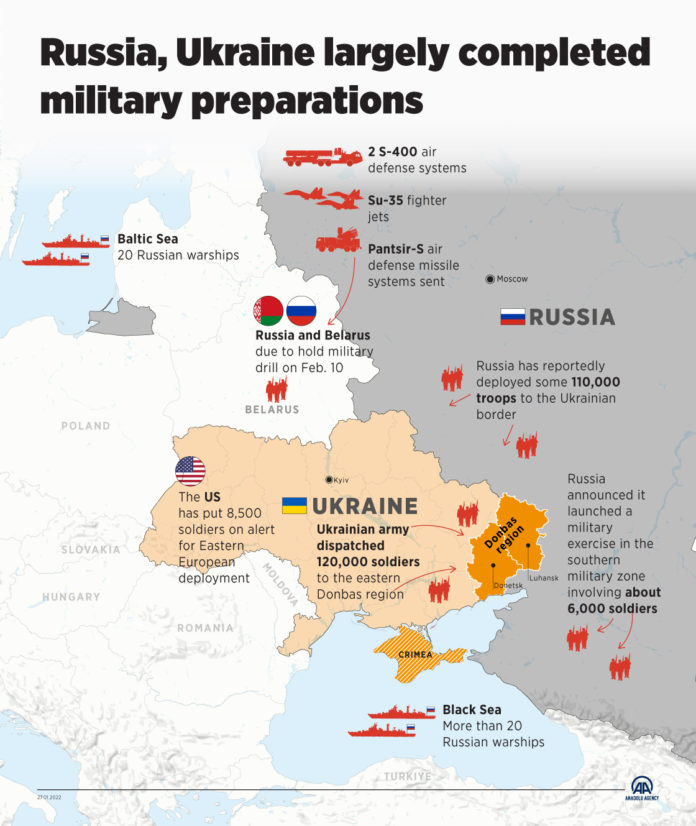 As the world holds its breath over a possible Russian invasion of Ukraine, and diplomatic initiatives to head off conflict continue between the US, NATO, and Russia, the military activities of the parties in Ukraine and its surroundings are escalating tension in the region.

Russia’s military buildup on the Ukrainian border and in Belarus and the Black Sea and the US’ arms support for Ukraine have both been growing.

While the US and Ukraine claim that Russia has deployed approximately 110,000 soldiers to the Ukrainian border, Russian officials have rebuffed these numbers.

Russia said that in fact, it launched a military exercise in the southern military zone involving only about 6,000 soldiers. The country also took action after the US put 8,500 soldiers on alert on Monday for possible Eastern European deployment.

The Ukrainian army has reportedly dispatched 120,000 soldiers and military equipment towards the Donbas contact line in Eastern Ukraine, where conflict with Russian-backed separatists has raged since 2014.

On Feb. 10, Russia and Belarus are due to hold a military drill called Allied Determination. According to the Kremlin, so far two S-400 air defense systems, Su-35 warplanes, and Pantsir-S air defense missile systems have been sent to Belarus.

The US recently said that last year it had provided more than $650 million in security aid to Ukraine. The total amount of aid since 2014 has topped $2.7 billion.