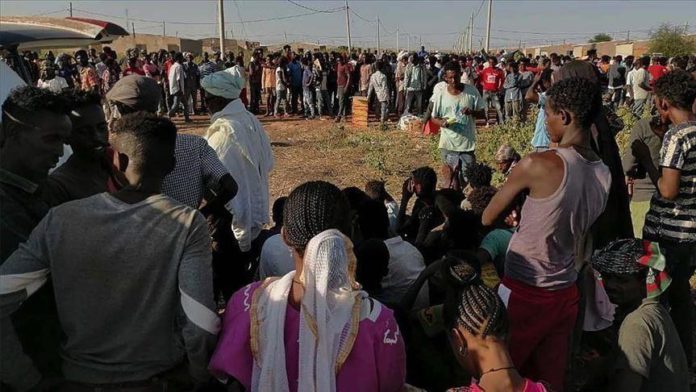 Tens of thousands of people have gathered in Ethiopia’s capital Addis Ababa on Thursday to decry the Tigray People’s Liberation Front (TPLF) for fighting for a comeback.

The massive gathering has crowded the Meskel square, a central boulevard in Addis Ababa, as demonstrators are holding posters and placards condemning the TPLF and expressing solidarity with the Ethiopian National Defense Forces.

“The TPLF had its chance for ruling Ethiopia. It did for 27 years with an iron grip of grim human rights violations. It was kicked out of power through the sacrifices of the youth in Oromia and Amhara,” he told Anadolu Agency.

“The TPLF’s policy divided the nation. The people of Tigray must rid themselves of the TPLF once and for all,” he added.

The TPLF ruled Ethiopia for 27 years at the head of a four-party coalition called Ethiopian Peoples’ Revolutionary Democratic Front before it was deposed in 2018 after three years of anti-government protests.

The armed clashed started on Nov. 3 last year, when the TPLF forces attacked the Northern Command of the Ethiopian army stationed across Tigray, including in the regional capital Mekele, killing soldiers and looting sizable military hardware. On Nov. 4, the government launched a massive law enforcement operation in Tigray to quell the insurgency.

More than one million people got internally displaced and tens of thousands fled to neighboring Sudan. The TPLF forces Tuesday crossed to Tigray’s neighboring region of Afar where they attacked and blocked humanitarian convoys from entering Tigray.

People are very much irked by the fact that TPLF forces continue attacks in numerous fronts, killing civilians and destroying infrastructure facilities even after Ethiopia’s government declared a unilateral cease-fire in June purportedly to let farmers in the northernmost region of Tigray to make use of the current main rainy season to harvest their lands.

The TPLF has been trying to regain power by expanding into neighboring regions southward and eastward after the unilateral cease-fire.

Pictures coming out of the conflict zones depicting children being deployed by the TPLF as soldiers sent shockwaves across Ethiopia, a nation of more than 110 million people. The Tigray region has a population of an estimated 5.5 million people.

“Ethiopia is currently undergoing one of the most difficult times in its history,” Addis Ababa Mayor Adanech Abebe said.

“It is sad to see foreign lobbyists and some international media houses keep supporting a terrorist organization even after they watch the TPLF conscripting children as soldiers,” she said.