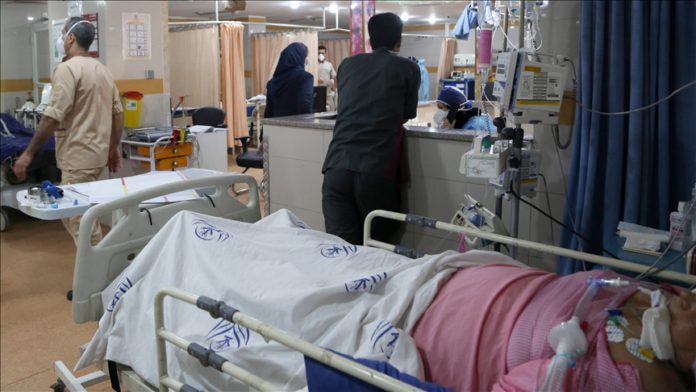 With a rapid surge in hospitalizations for COVID-19 outpatients and a slow vaccine rollout, officials and health experts have sounded alarm over a fifth wave of the coronavirus pandemic in Tehran and other major cities.

In the past one week, there has been a 10 percent spike in hospitalizations and outpatient cases in the capital city, according to Nader Tavakoli, the deputy head of Iran’s national coronavirus combat taskforce.

He warned that Tehran will return to the high-risk “red category” if the trend continues in coming days, while emphasizing that Iran was sitting at the cusp of a fifth wave after overcoming the deadly fourth wave.

Iran recorded 11,748 new infections and 137 fatalities on Wednesday, besides 1,222 new hospitalizations, a steady rise from last week, with Tehran accounting for the majority of new cases and hospitalizations.

Without specifying the variant of new infections, authorities have attributed them to mutated virus and non-compliance of health protocol, especially during the recent Tehran City Council elections.

Apart from some cities on the outskirts of capital Tehran, a number of cities in southern and eastern provinces are presently marked as “high-risk”.

Dr. Alireza Zali, head of Tehran’s coronavirus combat taskforce, has also warned of a fresh wave in the capital city, saying the number of outpatients in hospitals have increased alarmingly in past few days, crossing 10,000 mark after weeks.

Meanwhile, the situation has also been deteriorating in the southeastern province of Sistan-Baluchistan, bordering Pakistan and Afghanistan, which is presently in the high-risk category.

On Wednesday, a lawmaker from Sistan-Baluchistan, warned of a “humanitarian catastrophe” if attention is not paid to the unfolding crisis in the border province.

Moinuddin Saeedi, speaking in the parliament, said the health ministry that is speaking of providing vaccines to other countries must “first look at the oppressed people of Sistan and Baluchestan.”

What has contributed to the crisis is the slow vaccine rollout, according to experts.

While Iran has begun mass production of two homegrown COVID-19 vaccines in addition to the imported vaccines, so far only 4.4 million people have been administered at least one dose and around 1.6 million have got both shots.

According to officials, many elderly people have been showing vaccine hesitancy, which makes them more vulnerable to new strains of the virus, especially India’s Delta variant.

In Tehran, around 8 percent of the population has received the vaccine so far, mostly those above 70 years of age.

Dr. Mostafa Nikbakht, a Tehran-based epidemiologist, believes the “speedy vaccine rollout” is the only way to prevent the fifth wave of the pandemic in Iran.

“Compared to other countries, we have been slow but there are several factors responsible for that,” he told Anadolu Agency. “With indigenously developed vaccines being mass produced, we must speed up the vaccination process, while at the same time strictly comply with health protocols.”

He blamed the latest spike in infections and hospitalizations to the people’s “relaxed attitude” and “failure of authorities to enforce restrictions in public places”.