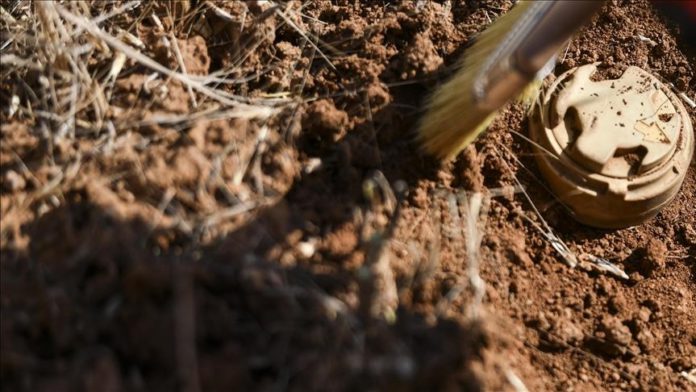 The 5+5 Joint Military Committee in Libya announced Sunday that three tons of explosive remnants of war had been destroyed in part of the country.

The munitions were destroyed in the Abu Qurayn area between Sirte and Misrata.

The technical team attached to the committee destroyed the mines, missiles and ammunition by detonation.

The committee’s member in charge of clearing the mines, Col. Mohamed Terjuman, told Anadolu Agency that mines in the area from Abu Qurayn to Buveyrat had been cleared and the area had been made safe.

Time is needed for the destruction of mines in the es-Sittin region, Terjuman said, adding the committee will hold a meeting on this issue in the coming days.

General Abdulhadi Dirah, the spokesperson for the Libyan army’s Sirte and Jufra Operations Department, said technical teams will conduct minesweeping activities east of Buveyrat in the coming days and a large number of mines are expected to be found in the area.

Since April 2019, forces loyal to Libyan warlord Khalifa Haftar have launched attacks on Tripoli and other parts of northwestern Libya, resulting in more than 1,000 deaths, including of women and children.

However, the Libyan government has achieved significant victories, pushing Haftar’s militia out of Tripoli and the strategic city of Tarhuna.

According to UN data, at least 400,000 people have been displaced in Libya, but local authorities argue that the real tally is much higher.

Haftar’s militants and mercenaries linked to Wagner, a Russian military contractor, reportedly left many mines and improvised explosive devices (IEDs) in civilian areas of southern Tripoli during their withdrawal.

Operating in line with a request by the Libyan authorities, Turkish bomb squads cleared the civilian territories of explosive materials.