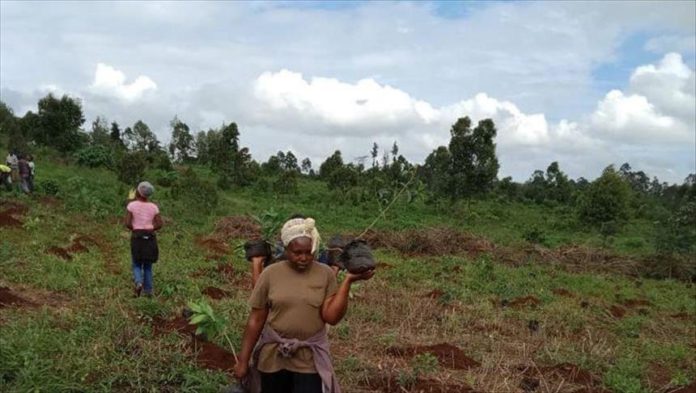 Women farmers in Tanzania are making great fortunes growing grapes and leading a quiet agrarian revolution in the country’s winery sector, which provides an economic lifeline to hundreds of families in the capital city of Dodoma.

The dark-colored fruit, which grows well in the drought-hit region, has a greater contribution in boosting the living standards of the people who have shunned traditional cash crops.

Miriam Silimbe, the leader of a farmers’ group, said women grape farmers in Dodoma have learned important skills of growing the crop that has helped them reap attractive dividends.

“We have been trained by government extension officers on best farming practices, including pruning and disease management,” she told Anadolu Agency.

According to Silimbe, the farmers have been trained to manage the crop effectively and are already producing 8-12 tons of grapes per acre each season, earning about 3.5 million Tanzanian shillings ($1,521) per ton.

Women are the backbone of the East African country’s rural economy, making up about 75% of the agricultural labor force, including planting irrigating, weeding, and harvesting crops.

Due to the effects of climate change, many women farmers in Dodoma have abandoned traditional crops and are now embracing grape growing, as rainfall patterns become increasingly hard to predict, local farmers said.

According to the Ministry of Agriculture and Cooperatives data, the country produced 16,139 tons of grapes in 2018-2019, out of which 11,552 tons were sold locally and to foreign markets.

From her home window in Kintinku village, Zawadi Chiboni, 61, looks at her vineyard grow. For over 10 years, she has been honing her grape-growing skills. Chiboni, unlike her parents who never liked the crop, wants to pass on this expertise to her children so that they can carry on the tradition and enjoy the results of their labor.

“Many people here don’t grow grapes. They think it is a waste of their time because it requires a lot of effort and knowledge,” she told Anadolu Agency.

Chiboni, who until recently used to grow finger millet and maize in her eight-acre farm, was put off by drought and a spate of fungal and wilting diseases, which inflicted huge losses.

“I have now put all of my efforts in growing grapes, and it is paying off,” she said.

For decades, the 43-year-old farmer from the Dodoma rural district relied on millet, onions, and maize. However, changing weather patterns, combined with diseases that reduced her crop yields, forced her to switch to cultivating grapes.

While drought has destroyed corn crops in much of the country’s central regions, farmers say the drier-than-normal growing season is beneficial to grapes.

“The dry season is best for grapes because they grow well with their leaves dry and avoid catching on the leaves’ fungus,” Chiboni explained.

She said dry weather allows for a greater concentration of sugars in the grapes while also hardening their flavor, adding: “Too much water changes the taste of the fruit.”

As the morning sun rises in the azure sky, a cool breeze blows across the plains of Zuzu — a sun-fried village in the outskirts of Dodoma.

As the fog gently lifts from the horizon, rows of vines are revealed, with women in blue aprons and glittering head coverings painstakingly cutting ripe grapes and packing them in plastic cases.

It is harvest time, the most important period of the year in this region on the rim of the East African rift valley.

Looking at these well-grown vines stretching as far as the eye can see, it is hard to believe that only a decade ago, the area was barren terrain scattered with baobab trees.

Sharp and confident, with a refined sense of humor, 45-year-old Yustina Mlewa is one of the successful grape farmers driving a revolution in the local winery sector.

“Tending grapevine orchards is like taking care of a small baby,” Mlewa, a successful woman grape farmer in the area, explained.

“You have to be patient and be there all the time,” she told Anadolu Agency.

A short woman with a vibrant, infectious smile, Mlewa exuded a genuine passion and engagement when talking about her job, which she loves, despite having to make personal sacrifices.

Mlewa spends most of her time working in the field, away from her family, especially during harvest, when she needs to supervise everything from grape picking to sorting and selling to a local winery.

“My husband is supportive,” she remarked, “but he occasionally complains that I spend too much time on the farm.”

As the darkness falls on the enchanted land, Mlewa and her fellow farmers leave the farm carrying cases filled with grapes ready to sell to a local winery.

“They usually sort, press, and put them in stainless containers to ferment and produce wine,” she said.