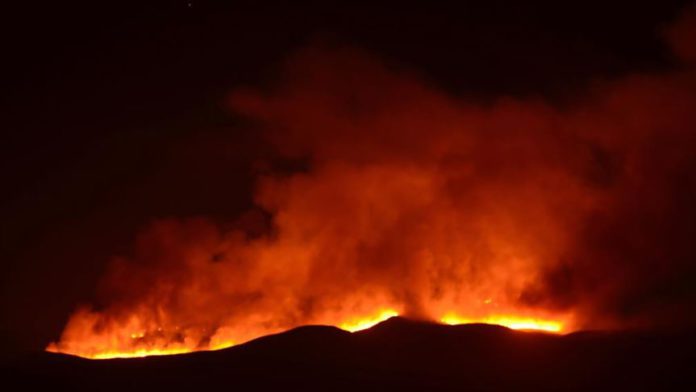 Firefighters and a legion of first responders in Tanzania are battling a raging inferno on Mt. Kilimanjaro, which has been spreading since Sunday evening, posing a serious threat to the flora and fauna surrounding Africa’s highest mountain peak.

The fast-spreading bushfire, believed to be fueled by soaring temperature and high winds, erupted near Whona camp – a stopover used by tourists and hikers – and efforts to contain it are underway, authorities said on Monday.

The Tanzania National Parks Authority (TANAPA), which manages the park within which the mountain is perched, said the roaring flames have destroyed a large part of the mountain forest near a resting camp for tourists who use Mandara and Horombo routes to climb.

Pascal Shelutete, TANAPA’s senior assistant commissioner, said in a statement that firefighters, emergency responders and volunteers from the College of African Wildlife Management (CAWMSO) have joined forces with local residents to battle the blaze, whose source is still unknown. No casualties have been reported so far.

“We are taking all necessary precautions to ensure the safety of our visitors and their property, without jeopardizing ongoing tourism activities in the area,” Shelutete said.

He did not say about the extent of the damage so far, promising to give more details later as authorities are still assessing the situation.

However, eyewitness reports suggest the fire may have been caused by illegal honey harvesters who often use smoke to scare away bees from the hives or tree holes.

Meanwhile, David Ponera, a representative of CAWMSO, said hundreds of students have been dispatched to help put out the blaze.

However, sources in Kilimanjaro said a lack of equipment and high altitude are hampering efforts to bring the blaze under control.

Kilimanjaro, the world’s tallest free-standing mountain at 5,895 meters (19,341 feet) above sea level, is highly susceptible to the worsening impacts of climate change and increasing human activities.

The mountain, which attracts about 50,000 tourists every year, has frequently braved fire incidents.

Wildfire and rampant illegal logging have encroached on the ecosystem around the park and disturbed a forest belt around the mountain area, local authorities said.

According to Wilbad Meena, a local resident, a single wildfire in the mountain is capable of destroying hundreds of hectares of woods as well as killing many endangered animal species.

“I honestly cannot correctly assess the scale of forest destruction but it is big, I could see a plume of smoke rising into the sky from as far as Moshi,” said Meena.