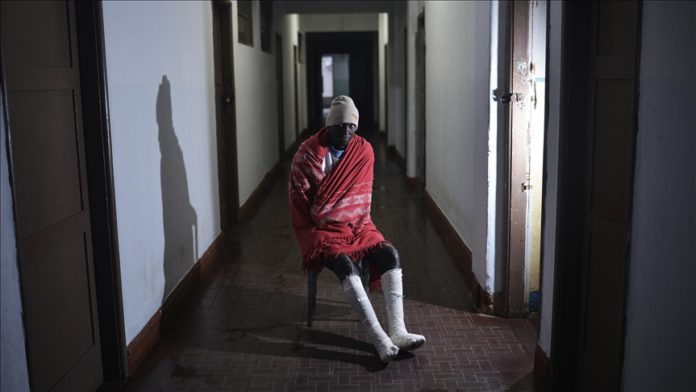 Aziza Mgaya does not remember how she ended up at a homeless shelter after she was diagnosed with leprosy, which changed her life forever.

With her lips twisted to the side, left eye swallowed by a fallen facial muscle, fingers truncated, she is in misery.

Mgaya, 46, who speaks with difficulty, was barely 16 when the skin around her hands started to peel and subsequently withered. Her palms turned grey and were numb to the touch.

“I was taken to the hospital then, where I was given some pills and a cream to rub on my hands,” she said.

Four months later, a deep wound appeared in her palm.

“It was very painful and it wouldn’t heal,” said Mgaya who woke up to the grim reality that she had leprosy.

“I was too young. It was not easy to accept the condition given the existing social stigma against lepers,” she said.

Like others suffering from leprosy, which ravages the skin and nerves and causes painful deformities, the diagnosis for Mgaya meant a life sentence of social isolation.

“I could barely do anything. I was a burden to the family that’s why I decided to come here,” she said angrily.

Perched on an impoverished neighborhood six kilometers (4 miles) from Tabora in western Tanzania, the village is home to lepers and other marginalized people who are shunned by their families because of the mistaken belief that they are cursed.

Leprosy is curable but it can mutilate body organs and cause terrible disfigurement.

While its devastating physical effects can be avoided when a patient is treated in the early stages, in many cases the diagnosis is identified too late.

As part of its broader push to dispel Neglected Tropical Diseases (NTDs) Tanzania has recognized leprosy in its policy, paving the way for sufficient budget resources to fight and eliminate the social malady which has pushed many to the edge of survival.

Upendo Mwingira, NTD Programme Manager at Tanzania’s Ministry of Health Community Development, Gender, Elderly and Children said the nation has significantly reduced cases of leprosy in the past 30 years.

“We have multiple policy interventions at our disposal to eliminate not just leprosy but also other neglected diseases,” she told Anadolu Agency

She said the government is determined to defeat the malady by strengthening community-based leprosy elimination campaigns and the integration of leprosy care in health facilities.

Despite the progress Tanzania has made in taming the disease, experts say the East African country’s final push to eliminate the disease requires community involvement, innovation and a coordinated response with global partners.

Deusdedit Kamara, coordinator of National Leprosy and Tuberculosis care and Prevention (NTLP) said preventive treatment to those who have had contact with leprosy patients is necessary to reduce transmissions.

“Fighting leprosy requires a changing mind-set toward those who are suffering. This disease is not a source of shame and prejudice. All barriers to those seeking medical care should be removed,” he said.

Sitting on a squeaking wooden bench, the Kidawa Shamte, 61, is unflinchingly determined to kill a menacing bed bug scuttling on the edge of her head shawl using her twisted palms.

“I am alive today because of the grace of God,” she said. “Some people don’t give us the respect we deserve as fellow humans.”

As a disease with a long history of misery and neglect, many lepers in Tanzania often become street beggars in major cities to avoid discrimination in their families.

“They are miserable members of the society,” said Harold Kilungu, a social worker at Tabora Advocacy Centre for Development. “Some of their family members believe they’re sinners who brought the illness among themselves,” Kilungu said most lepers in Tabora face acute depression and anxiety because of blatant discrimination and the negative perception of the disease.

“We are trying our very best to raise community awareness,” he said.

Government data and World Health Organization (WHO) statistics show the disease is no longer a public health problem since the country attained leprosy elimination level with less than 10 patients in every 100,000 people.

Moreover, infection rates have been reduced from 43 patients in every 1 million people in 2019, according to data from the Tanzania National Bureau of Statistics.

Globally, millions of poor people are affected by preventable neglected tropical diseases. In 2015, the UN formally recognized NTD as a target for global action toward the Sustainable

Poverty has many faces, but in Tanzania, one of the most tragic has been its close link with neglected diseases. According to WHO data, from 2015, more than 60% of 1.5 billion people suffering from NTDs, including leprosy and elephantiasis, received treatment.

Although leprosy can be treated with multi-drug therapies, those affected in Tanzania still face significant stigma.

Kessy Lusumo, 56, was 21 when he was diagnosed. Sitting on a wooden bench, his hands twisted by the disease, he clutches a torn bible as he ponders his predicament.

“My parents died when I was young and I lived with my uncle,” he said. “When I found out I had leprosy he expelled me. I had nowhere to go and felt that my future was spoilt.”

Distraught, Lusumo sought help at a local shelter run by sisters of charity in Tabora.

“Nobody would help you, if they know you’ve leprosy, we suffer in silence,” he said.