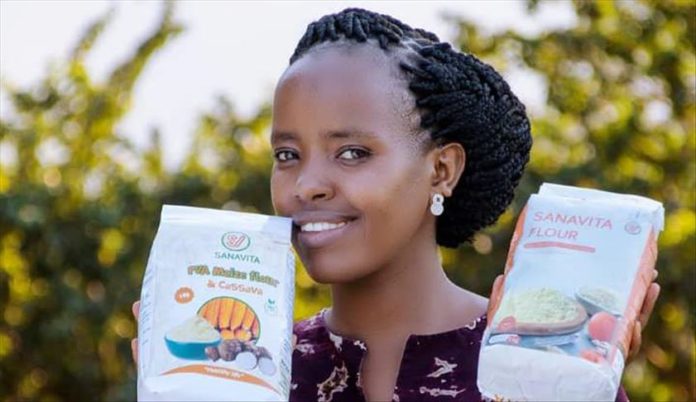 A young nutritionist and food entrepreneur in Tanzania has won a prestigious international award for devising innovative business solutions to improve nutrition for low-income and marginalized families.

Jolenta Joseph, 29, secured a cash prize of US$10,000 and a prestigious mentorship award dubbed the Food Technology Innovation Prize issued by the Global Alliance for Improved Nutrition (GAIN), a Swiss-based charity working to improve global nutrition by promoting healthier diets to vulnerable communities.

“This is really good news to us…We are aiming to end ‘hidden’ hunger in Tanzania, and this means growth for us,” said Jolenta, whose company, Sanavita, uses solar dryers to process nutrient-dense crops — notably orange-fleshed sweet potatoes — into various edible products.

Hidden hunger, involving a lack of vitamins and minerals, occurs when the quality of food people eat does not meet their nutrient requirements, according to the World Health Organization.

Organized by the Sun Business Network, a global platform for business and nutrition, 21 finalists including Jolenta were picked through a rigorous selection process that attracted 500 Small and Medium Enterprises (SMEs) from across Africa and Asia.

Jolenta, who actively participated in frenzied jostling for the cash and business mentorship prizes, impressed the panel of judges by displaying remarkable creativity that has helped resolve nutritional challenges in rural parts of Tanzania.

Her agribusiness company Sanavita — which is working to fight malnutrition, particularly ‘hidden’ hunger — has also been recognized and awarded a mentorship prize by Agricultural Systems International (AGREA) for showcasing innovative creativity for its ability to produce, add value and process staple crops rich in micronutrients.

“What I like about Sanavita is their use of solar dryers. This preserves the nutrients of the product. So this is pretty exciting and innovative,” said Cherrie Atilano, one of the judges, who is also the CEO of AGREA, an innovative agribusiness company striving to eradicate poverty.

The first cash prize of $20,000 for the most innovative solution for improving nutrition went to Baby Grubz, a Nigerian-based firm working to develop nutritious complementary foods for infants.

Despite making remarkable progress in fighting malnutrition a decade ago, Tanzania is still struggling to fight chronic malnutrition (stunting), which affects 34% of children below the age of five.

With a population of 57.9 million, the East African country is still haunted by micronutrient deficiency, particularly a critical shortage of iron and Vitamin A which affects 58% of children under the age of 5, in addition to 48% of women aged 15-49, government statistics show.

But with help from local nutrition experts and food entrepreneurs determined to reverse the trend, more farmers have been sensitized to grow nutrient-dense crops including orange sweet potatoes to bolster their families’ nutrition, strengthen food security and generate incomes.

In the sun-fried plains of Msolwa, a village perched on the slopes of the Uluguru mountains about 190 kilometers west of Tanzania’s eastern Morogoro region, every farmer has a story to tell about orange-fleshed sweet potatoes and how they’ve helped them eliminate bouts of ‘hidden’ hunger.

“Orange potatoes are very good. They’re nutritious, and most of us grow them for food and for business,” said Edmund Muhando, the head of a farmers group.

According to him, the orange potato breed, which is widely grown in the impoverished village, is highly profitable.

“Our children enjoy good health. They grow well because they eat vitamin-rich potatoes,” he said.

The 57-year-old is among many farmers in the region who grow nutrient-dense crops as a strategy to fight malnutrition, improve food security and increase incomes.

The orange-fleshed sweet potato was introduced in Tanzania in 2002 by the International Potato Center as an alternative staple crop in the wake of a severe drought that ravaged maize harvests in many parts of the country.

Despite its growing popularity, observers however say that efforts to expand production of orange potatoes in East Africa are hampered by a shortage of high-yielding vines, a poor delivery system for pest-free vines and a lack of political support.

Armed with a Bachelor of Science degree in human nutrition from the Sokoine University of Agriculture (SUA), Jolenta has mobilized hundreds of local farmers and trained them to grow orange-fleshed sweet potatoes, which her company buys and processes to make various food items.

The company has since been supporting a legion of farmers to grow bio-fortified crops including beans, maize and orange potatoes and process them into nutritious flours.

“We grow these crops and process them into different food items to raise awareness on better nutrition. We encourage farmers to eat these products,” said Jolenta.

As a woman-led company, Sanavita targets a key segment of the population, especially pregnant women and lactating mothers.

“Bio-fortified products are important for pregnant women, lactating mothers and children since they contain the micronutrients badly needed by this critical group,” she told Anadolu Agency.

Born in 1991 to a peasant family in the northern Manyara region, Jolenta is determined to succeed in life. She knows that success requires hard work, passion and the ability to plan and set priorities.

From her humble beginnings, the soft-spoken food scientist initially sold orange potatoes to the local markets before she decided to cut, dry and sell them to food processors as ingredients for their products.

Her company has since grown into a medium-sized business with an expanded investment portfolio.

“Hopefully our business will grow much faster now that we are part of the GAIN network” said Jolenta, who employs 18 people, five of them full-time.

In a bid to dispel myths and cultural practices that stifle healthy eating habits, Jolenta embarked on an awareness campaign on television, radio and social media to educate people about the importance of eating nutrient-dense food products.

“I think it is important to invest in nutrition education and raise awareness on healthy eating and producing bio-fortified crops,” she said.

Jolenta’s awareness drive is not without a profit. Glory Mlay, one of her customers, said her son, who started using Sanavita’s products when he was barely six months old, has grown healthy and now weighs 13.6 kilograms.

“I am very happy because my son likes nutritious porridge, and we don’t force him to drink it, since it tastes good,” Mlay said.

John Magoti, a resident of Morogoro, is thankful to Jolenta for her advice on child nutrition.

“I met Jolenta when I was running errands looking for “Viazi Lishe” [nutritious potatoes]. She advised me on how best to feed my son, and the results have been great.”