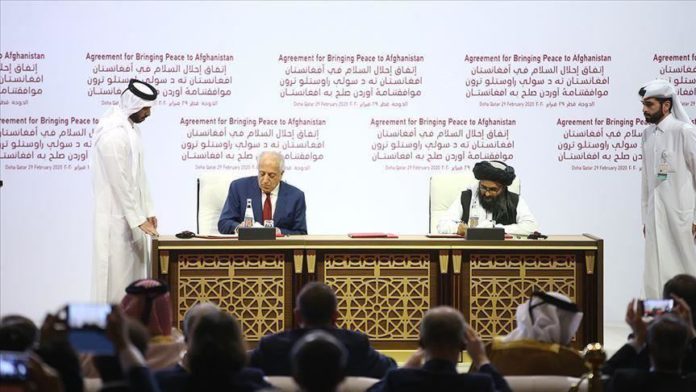 Taliban leader Mullah Hibatullah on Wednesday urged the US not to let the landmark peace agreement to fail amid resurging violence in Afghanistan.

In his usual annual Eid al-Fitr message, the Taliban leader outlined an 11-point “policy and objectives” concerning the current state of affairs and recent developments in the country.

He also strived to assure Afghan male and female members of their due rights, social justice and welfare.

“The Islamic Emirate [the Taliban] is committed to the agreement signed with America and urges the other side to honor its own commitments and not allow this critical opportunity go to waste,” he said while urging the US officials to ”not afford anyone the opportunity to obstruct, delay and ultimately derail this internationally recognized bilateral agreement between us and you.”

“On one end they [the Taliban] are ‘butchering’ our people and spread horror and on the other end talking about the peace agreement, this message [by the Taliban leader] is meaningless unless they make peace with the masses,” he said in a tweet.

A day earlier, the UN Assistance Mission in Afghanistan said rising numbers of civilian casualties in Afghanistan, with a disregard for international law aiming at protecting civilians from harm, underscore the urgent need for parties to halt the fighting and to refocus on starting intra-Afghan peace negotiations.

This came on the heels of yet another string of at least two gruesome attacks on mosques in Parwan and Khost provinces on Tuesday evening.

The Afghan government held the Taliban responsible by creating environment for the so far unknown attackers killing at least 11 worshippers in these two mosques.