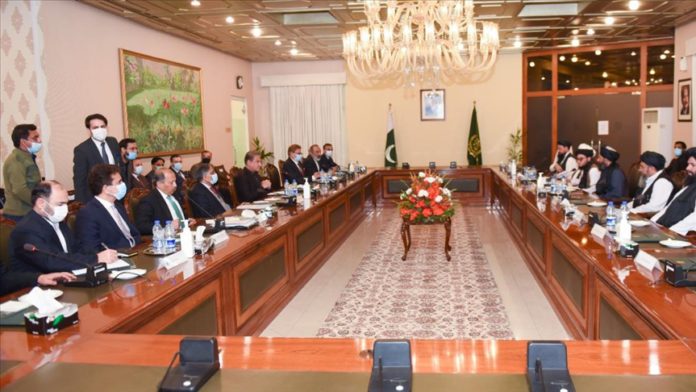 A delegation of the Afghan Taliban met with Pakistan’s top diplomat Wednesday to discuss the ongoing peace process in Afghanistan.

Reaffirming Pakistan’s support for a “peaceful, stable, united, sovereign and prosperous Afghanistan,” Qureshi said Islamabad would continue to “facilitate” the peace effort, according to a statement by the Foreign Ministry.

He voiced hope that the Afghan parties would seize on this “historic” opportunity to establish lasting peace in Afghanistan through an “inclusive, broad-based and comprehensive” political settlement.

Emphasizing the importance of all sides’ violence-reduction efforts leading up to the current cease-fire, Qureshi said Pakistan would “respect” the decisions taken by the Afghan parties through the Afghan-led and Afghan-owned peace process.

He also underlined the need for caution against “spoilers” seeking to disrupt the process.

The Taliban delegation thanked Pakistan for hosting millions of Afghan refugees for more than four decades. It also appreciated Pakistan’s “facilitative role” in the checkered peace process and shared its perspective on various aspects of the intra-Afghan negotiations.

This is the second Taliban delegation to visit Pakistan in the last four months.

In August, a seven-member Taliban delegation led by Baradar had held talks with Qureshi. Lt. Gen. Faiz Hameed, Pakistan’s spymaster, was also present in the meeting.

Meanwhile, the Afghan Foreign Ministry said it was aware of the Taliban delegation visiting Islamabad, adding that Kabul respects Pakistan’s efforts for peace in the war-torn country.

“The Taliban delegation’s visit to Islamabad is following consultation with the Government of the Islamic Republic of Afghanistan and as a result of the trip to Afghanistan by the Prime Minister of Pakistan Imran Khan,” according to a statement.

Separately, top Afghan peace negotiator Abdullah Abdullah said disagreements on where the talks should take place would not be allowed to undermine the process. Abdullah told a press conference in Kabul that it would be better to hold the talks in Afghanistan, but would “depend on the agreement of both sides.”

President Mohammad Ashraf Ghani on Sunday backed the proposal to complete the remaining parts of the ongoing intra-Afghan negotiations inside Afghanistan.

Addressing a Cabinet meeting, Ghani said the negotiations should continue in the country with the public having knowledge of the issues being discussed.

“The Taliban claim to be in Afghanistan, so do they not negotiate inside Afghanistan?” President Ghani was quoted in a series of tweets by Sediq Sediqqi, spokesman for the Presidency.

Later on Wednesday, Pakistani premier Imran Khan had a phone call with Ghani to discuss the progress in the peace process, as well as ways to strengthen relations between the two neighbors.

According to a statement, Khan underlined during the call that the Taliban’s visit was part of Islamabad’s “outreach to all Afghan stakeholders” to ensure progess for peace in the country.

*Shadi Khan Saif contributed to this story from Kabul