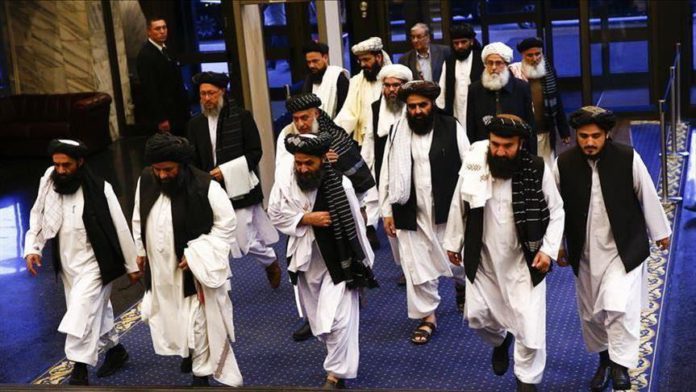 The Taliban leader on Tuesday hailed the beginning of the withdrawal of foreign forces from Afghanistan, and urged the US to abide by the peace agreement signed earlier this year.

Mawlawi Hibatullah Akhundzada, in his Eid al-Adha message, urged the US “not create obstacles for ending of the longest war in American history with unwarranted remarks and propaganda.”

The supreme leader of the insurgents said extending the 10-day prisoner exchange process to four months, existence of black lists, and carrying out drone strikes and bombardments on “unjustifiable grounds do not serve the interests of anyone.”

He asserted that the group was “on the threshold of establishing an Islamic government” in the war-ravaged country.

The message was published on the group’s propaganda website, al-Emarah, in Dari, Pashto, Urdu and English languages.

On the proposed intra-Afghan talks, Akhundzada said the exchange of prisoners was a “key development,” which should not have been delayed by Kabul.

“As we are taking steps towards peace, the prisoners release process plays a big part in building trust and shortening our path towards that end,” he said.

The US in February committed to withdraw all foreign forces from Afghanistan by July 2021.

In return, the insurgents pledged to prevent terrorist groups from using Afghan soil for attacks, and promised to seek reconciliation with other Afghan groups through negotiations.

The exchange of prisoners — 5,000 Taliban in return of 1,000 captive security forces — was also agreed upon. However, disagreements have led to a delay in dialogue.

This time, however, the insurgents did not announce a cease-fire. In May, on the occasion of Eid al-Fitr, the group declared a surprise three-day pause in fighting, which was reciprocated and welcomed by the Afghan government.