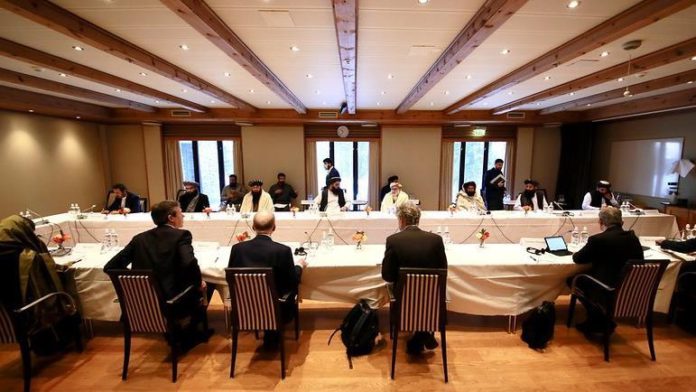 A 15-member delegation of the Taliban met Monday in the Norwegian capital Oslo with special representatives from Western countries amid the deteriorating humanitarian situation in Afghanistan.

On the second day of the talks hosted by Norway, the Taliban delegation, led by acting Foreign Minister Amir Khan Muttaqi, held a meeting with representatives from the US, UK, Norway, Germany, Italy, Qatar, France and the European Union.

Photos from the Talks on Afghanistan in Oslo are available here: https://t.co/rHTBbi2g22

The meeting focused on discussions on the economy, humanitarian aid, security, central bank operations, health and other relevant issues, Abdul Qahar Balkhi, a spokesman for the interim Afghan Foreign Ministry, said on Twitter.

Discussions are still in progress, he added, noting a full report would be available later.

Concerned about the “grave” humanitarian situation in Afghanistan, Norway said on Jan. 21 that it would be hosting Taliban representatives for talks in Oslo from Jan. 23-25.

Foreign Minister Anniken Huitfeldt said Norway is “extremely concerned about the grave situation in Afghanistan, where millions of people are facing a full-blown humanitarian disaster.”

“In order to be able to help the civilian population in Afghanistan, it is essential that both the international community and Afghans from various parts of society engage in dialogue with the Taliban,” she added.

The Taliban regained power in August 2021 amid the withdrawal of foreign forces and collapse of the US-backed government. The interim administration, however, has yet to gain international recognition.

While international funding remains largely suspended, billions of dollars of the country’s assets abroad, mostly in the US, are also frozen.

According to the United Nations Office for the Coordination of Humanitarian Affairs (OCHA), half the population now faces acute hunger, over 9 million people have been displaced, and millions of children are out of school.