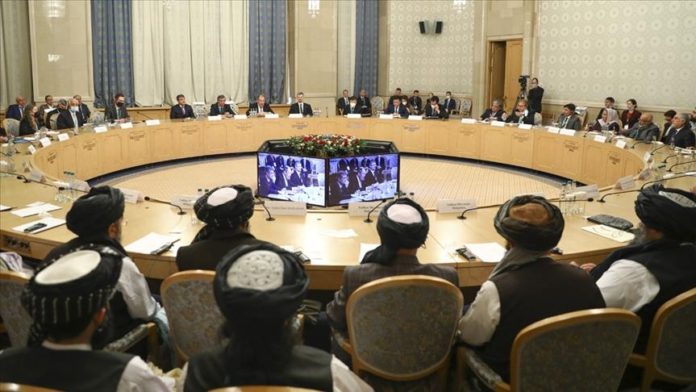 A delegation of the Taliban political office, headed by Shahabuddin Delawar, met with Russian Presidential Envoy for Afghanistan Zamir Kabulov in Moscow on Friday.

The two sides held “informal consultations” over recent developments in Afghanistan that “brought up to 85% of the Afghan territory” under the Taliban’s control, Delawar claimed at a news conference following the meeting.

However, the movement’s goal is not to seize power in Afghanistan, rather it wants all representatives of Afghan society to take part “in the work of the Afghan state,” Delawar said.

He disputed the US claim that the Taliban agreed not to attack major Afghan provinces, claiming that the movement halted its offensive in the spring due to the Doha agreement, suggesting foreign troops withdrawal by May 1. But Washington did not keep its commitment, which led to the current situation in Afghanistan, he added.

However, Delawar said he expects US President Joe Biden, who slated Aug.31 as a new deadline for the US troops withdrawal, will keep his word this time.

As for the future relations with Washington, the Taliban are willing to rebuilt relations and start “from the scratch,” he said.

Asked about 18,000 Afghan interpreters who worked with US and NATO forces and are now seeking asylum in the US, Delawar asserted that the Taliban “guarantee they can stay in Afghanistan, live a normal life, they will not be harmed.”

He also pledged that the territories under Taliban control will be safe for cross-national freight and international humanitarian organizations’ work.

“We appeal to all international humanitarian organizations not to halt (work) and continue providing their humanitarian mission in the specified territory,” he said.

When asked about a future form of government in Afghanistan, Delawar said the Taliban advocated for an Islamic Emirate but can reform it in the future.

Russia is mostly concerned about the situation in Afghanistan because the hostilities can spread to the territory of its ally Tajikistan, Russian Foreign Minister Sergey Lavrov said on Friday.

Speaking at a separate news conference after a meeting with his Indian counterpart Subrahmanyam Jaishankar, Lavrov said the Afghan sides drafted steps aiming to normalize the situation under the US mediation, agreed to start a political process, enter a transition period, and then define how Afghanistan will live further.

“We are in favor of ensuring that the agreements reached are implemented,” Lavrov said.

The minister said the Afghan issue will be discussed at the Shanghai Cooperation Organization (SCO) meeting in Dushanbe next week: “We’ll see what our Afghan partners will say about the start of the political process,” he said.

For his part, Jaishankar said the situation in Afghanistan has affected regional security and safety.

“Violence is not a solution for anything,” he said, urging the parties to reduce its level.

In terms of Afghanistan’s future, whoever rules the country must be legitimate, and this cannot be ignored, Jaishankar stressed.

Meanwhile, Foreign Ministry spokeswoman Maria Zakharova said in a statement that the Taliban currently control about two-thirds of the Tajik – Afghan border.

She said Afghan security forces many times crossed the border into Tajikistan territory during clashes with the Taliban.

“Moscow and Dushanbe maintain intensive working contacts through defense departments, border services, and diplomatic channels. The situation on the border is under our closest attention. The 201st Russian military base in Tajikistan is equipped with everything necessary to assist the republic in controlling the situation on the border,” she stated.

If necessary, Russia will take additional steps to prevent aggression or territorial provocations, she said.

The Taliban visit Moscow in the wake of US withdrawal from the war-ravaged country after 20 years and amidst an alarming surge in violence and takeover of many districts by the Taliban.