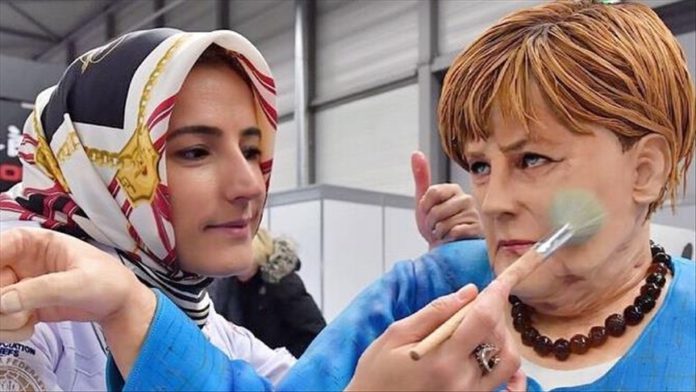 A talented Turkish chef is making the best use of her time during coronavirus lockdowns to focus on her hyper-realistic cakes of just about anything you can think of, and along the way becoming a viral sensation.

Tuba Geckil, a self-described “cake & sugar artist,” told Anadolu Agency that staying indoors allowed her to do what she always really wanted to do but was unable to before due to intense work.

Geckil, 44, shares her hyper-realistic cakes of everything under the sun with the hashtag #everythingisacake with her over 272,000 devoted followers on Instagram plus thousands of others on YouTube.

Her realistic faux fruits, foods, and everyday objects made of cake have set the web on fire, going viral worldwide.

For Geckil, anything can be turned into a cake that will people will greet with amazement and delight.

Although Geckil stresses that she is not a trained painter or sculptor, even her YouTube profile picture shows her carrying paintbrushes, hinting at her amazing feats.

Geckil, originally from Turkey’s central Anatolian province of Eskisehir, grew up in a family full of art, with both of her parents being amateur painters.

Her marriage meant a move to the metropolis of Istanbul, where she now lives and works.

From painting to baking

Gifted through genes or luck, Geckil received no formal art training, but sees her talent as “normal,” something anyone can do.

When she first moved to Istanbul she opened an art studio where she did large-scale paintings.

After holding her first painting exhibit, she thought “I got my satisfaction from this path,” she explained.

Looking for a new passion, she dove into the art of moldable sugar paste – the raw material for her amazing cakes – for the occasion of her son’s first birthday.

After transforming one of her son’s favorite cars into a lifelike cake, she was delighted to see that he thought it was real and even wanted to play with it.

When she first took sugar paste into her hands, she said: “I liked so much that it stays the way I shape it.”

This was Geckil’s first stab at making a 3D cake. Later her friends and family began to ask for similar cakes, which led her to open a workshop.

“I want to do what I dream about. I was taking orders, but I could get up in the middle of the night and make the cake that came into my head,” she said.

“With that car cake, I realized that I could turn anything I saw into a cake,” she said proudly.

Bubbling with excitement, Geckil said: “There was no limit for me.”

She added: “I worked with great excitement and enthusiasm every day until the morning light either to fill orders or to make the cakes that I dreamed of.”

Later, she began working on human modeling, which presented a number of challenges: “The industry had a problem with human modeling. Everybody was complaining about it.”

So when she began working on realistic cakes, Geckil began researching human anatomy to get it just right.

When she began sharing her work, she also began getting training requests. At first, she declined them, saying: “I needed to deepen my research.”

But after laying the foundation for offering coursework, she began. “This all happened about 15 years ago,” she said, and since then, she has shared her expert techniques with people in places as scattered around the map as the US, Nigeria, and India.

For years, she said she also was invited to give courses at baking schools and universities abroad.

“Because of the pandemic we had to take a break, but plans for the future continue. There are projects in various countries,” she added.

What Geckil loves most about making a cake, she said, is creating cakes that are the size of life itself.

“I love life-size cakes,” she enthused. “I like to surprise people when they look at them.”

“That puzzled expression in the eyes of people asking, ‘How did they do this?’ I think I enjoy it,” Geckil said.

She fondly remembered festivals and cake shows she attended across the world where she was awarded for her work on celebrated figures such as a life-size Harry Potter and Lady Diana.

But the world of realistic cakes is not all acclaim and awards.

When Geckil began making realistic cakes for the first time, she also made a traditional Turkish coffee cake, but got a surprising response.

“Nobody liked it,” she recalled. “I was so sad at that time, but later I realized that people didn’t like it because they thought it was really a cup of coffee even though it said it was a cake.”

Baking a realistic cake for Geckil takes around a couple of hours.

“Even if there are artistic details, it can be completed in a few hours at most,” but human modeling takes longer, at least three days, she explained.

For example, a cake depicting German Chancellor Angela Merkel took around a week, she recalled, explaining: “Her hair, it has very fine details.”

Geckil is assertive about the taste of her realistic cakes. “I design cakes like a completely personal haute couture dress design, and I customize them with everything from A to Z, according to taste.”

Most of Geckil’s customers order cakes with their mothers or fathers on them or else want a cake for their children’s first birthday in the shape of the child.

She also gets many orders for realistic cakes in the guise of fruits or other varied objects.

For the future, Geckil has two projects she wants to tackle if the coronavirus pandemic allows.

The first is to hold an international exhibition on Turkish culture where she will fashion cakes showing traditional Turkish food as well as cultural sites such as Pamukkale, the UNESCO World Heritage Site in Denizli known for its mineral-rich thermal waters and white travertine terraces.

Her second project is to bake a life-size house from the classic fairy tale Hansel and Gretel where children can actually stroll inside and see the inside.

Like the rest of the world, Geckil is eagerly awaiting the end of COVID-19 so she can realize her ambitious new projects.