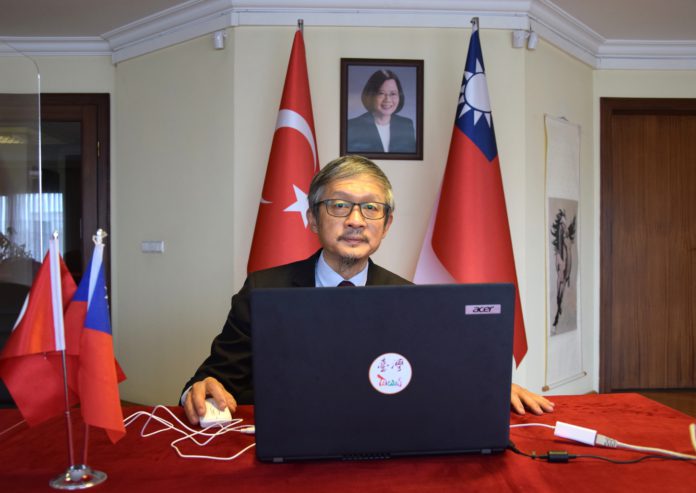 Taiwan’s head of mission in Turkey on Thursday voted in the photo contest hosted by Anadolu Agency.

“I voted for three photos because they made me think of the areas in which Taiwan and Turkey can collaborate more to make the world better, such as refugee crisis, humanitarian aid, disaster relief, and public health,” said Yaser Tai-Hsiang Cheng, who heads Taiwan’s economic and cultural mission in Ankara.

Yaser voted for the image of a 4-year-old girl being rescued after the Izmir earthquake in the News category.

“The photo shows that it’s genuine human nature to help others in the face of natural disasters. And the assistance can be international too,” Yaser told Anadolu Agency.

“Taiwan is also an earthquake-prone country. In 1999, a powerful quake claimed over 2,000 lives in my country. Turkey was one of the first countries that sent a rescue team to Taiwan, for which Taiwanese people remain grateful to this day,” he said.

The Taiwan mission in Ankara sent relief contributions to Izmir after the earthquake hit the coastal city last month.

The winners will be selected from three categories — news, life, and sports.

The photographs shortlisted for the contest include those selected by Anadolu Agency photo editors and which are frequently used in leading media outlets globally.

The images were put to a vote in the news category with 31 entries, life with 30 entries, and sports with 15 entries.

Yaser said in the Life category, he voted for the photograph of a Syrian boy hospitalized in Turkey’s Hatay province with his father accompanying him.

“This photo reminds us of how cruel wars are and how Turkey has been opening its arms to those who suffer,” he said.

The Taiwanese official also pointed to Turkey-Taiwan collaboration in Hatay along the Syrian border where it funded construction of a civic center which was inaugurated two months ago.

The building, called the Taiwan-Reyhanli Centre for World Citizens, was designed and built for Syrian and Turkish residents there.

“We will continue to work in solidarity with Turkey in providing humanitarian relief efforts,” the Taiwanese diplomat said praising Turkey for hosting nearly four million refugees.

In the Sports category, Yaser chose the photo of a health worker disinfecting stadium seats.

“It demonstrates that the coronavirus pandemic has impacted everyone in the world and profoundly changed the way we live,” he said referring to Taiwan’s success against the pandemic being one of the least affected nations.

“Taiwan can do more than simply protect itself against the pandemic. We can and need to participate in the world’s public global health network to share and learn information for the wellbeing of the Taiwanese and all humans,” he said.

The diplomat said it was “not easy to pick among these excellent photos since they all embody the highest standards of photojournalism.”

“And of course, I sincerely look forward to deepening the Taiwan-Turkey cooperation in journalism, particularly by strengthening Anadolu Agency’s partnership with its Taiwanese counterpart, Central News Agency.”

Healthcare workers who are fighting COVID-19 in the frontline were the first group of people who took part in this year’s voting.

Yaser is among many such diplomats posted in Ankara who participated in the ongoing photo contest.

Also, many people from different professions, students, athletes, and politicians have already chosen their favorite photos so far in Turkey.

This year’s voting will continue through Dec. 31 at Anadolu Agency’s website, photovideorate.aa.com.tr​​​​​​​.