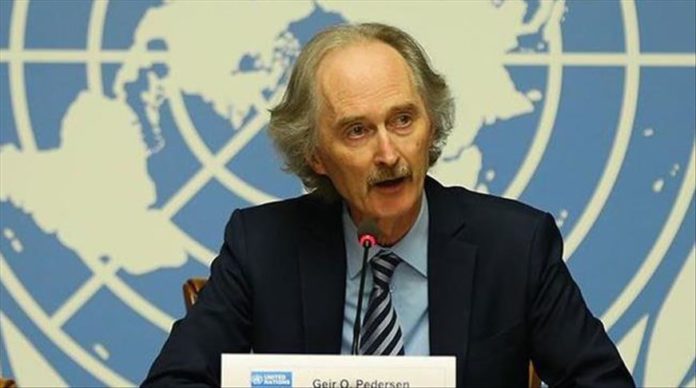 Syria’s warring groups have agreed to come to Geneva to resume talks aiming at a lasting peace for the country, the UN special envoy for Syria said Tuesday.

“As the pandemic situation allows, they have agreed to come to Geneva. They have agreed on an agenda for the next meeting,” Geir Pedersen told a UN video press briefing from his home in Norway.

“So, I’m hoping that when time allows and we meet in Geneva, that we can have substantial and good discussions.”

On Nov. 29, the last round of talks on the Syria peace could not start due to failure in reaching an agreement on the agenda, Pedersen had said in Geneva.

The Syrian Constitutional Committee — made up of opposition, civil society, and regime members — had started the talks on Nov. 20 with the UN facilitation.

On the potential resumption of talks, Peterson said that hopefully, the parties from the regime and the opposition and the civil society members of the constitutional committee would prepare themselves “so that when we meet in Geneva, we are ready to have substantial and deep discussions, and not waste time.”

Pedersen reiterated what he said in a Monday briefing of the UN Security Council in New York.

“There is relative calm in Idlib in the cease-fire that Turkey and Russia entered into at the beginning of March. It is still, by and large, holding. And I have said that this is indeed good news.

“But I’ve also warned that hostilities could resume and that would have devastating consequences. Of course, not only in Idlib, but in many other parts of Syria as well,” said the UN envoy.

He also said that it is “obviously very important that the US and Russia continue to work together.”

“As I said, they have done that before with success. Without the US-Russian cooperation, we would never have had Security Council Resolution 2254,” he said, referring to the resolution that calls for a cease-fire and political settlement in Syria.

Turkey and Russia agreed in September 2018 to turn Idlib into a de-escalation zone in which acts of aggression are expressly prohibited. The area has been the subject of multiple cease-fire understandings, which have frequently been violated by the Assad regime and its allies.

It is currently home to four million civilians, including hundreds of thousands displaced in recent years by the regime forces.