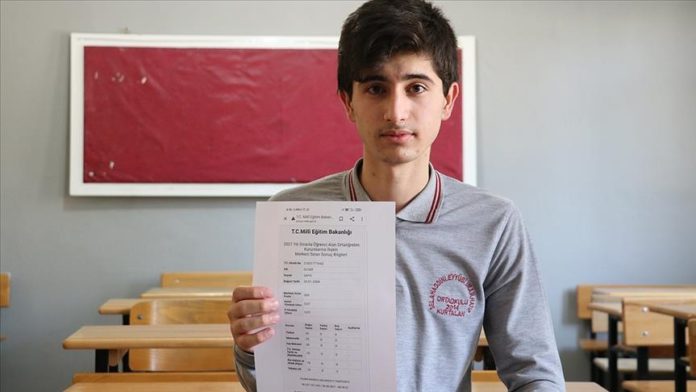 A Syrian student who fled the war in his country and took refuge in southeastern Turkey five years ago came in first on his high school entrance exam (LGS), his school said on Wednesday.

The school and district governorship of Kurtalan in southeastern Siirt province both congratulated Safo on Twitter and wished him continued success.

Syria has been locked in a vicious civil war since early 2011 when the Bashar al-Assad regime cracked down on pro-democracy protests with unexpected ferocity. Since then, hundreds of thousands of people have been killed and more than 10 million others displaced, according to UN officials.

Turkey hosts some 4 million Syrian refugees, more than any country in the world, and its policy of welcoming the refugees with open arms has been hailed as a model worldwide.

As of the 2019-2020 school year, more than 684,000 Syrian school-age children attended schools in Turkey, according to official figures.

Turkey’s National Education Ministry on Wednesday announced the results of LGS, which was held on June 6.

In a report on the exam, the ministry said that 97 students from 36 provinces answered all questions correctly and got full points on the exam.​​​​​​​

In Turkey, any student who successfully completes eight years of primary education can go to high school by taking the LGS test.

Indian-administered Kashmir cracks down on Rohingya