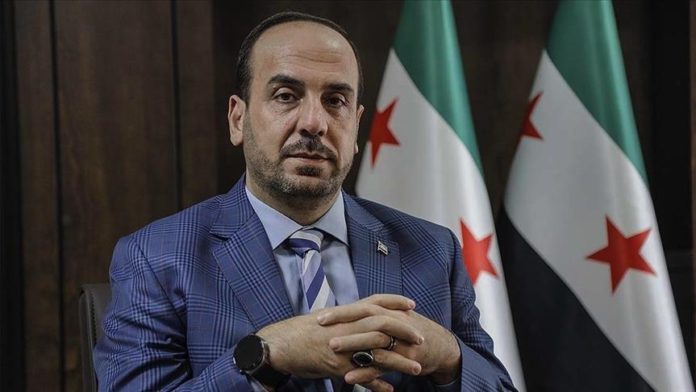 The head of the Syrian opposition on Wednesday said the Bashar al-Assad regime is disrupting the UN peace process to end the country’s 10-year war and called for the establishment of a transitional authority.

Nassr Al Hariri, president of the Syrian National Coalition, was speaking from the coalition’s headquarters in northern Syria at a virtual press conference organized by the association of journalists working at the UN in Geneva.

“In regard to the political process, the regime hasn’t made any serious step towards a political solution at all levels,” said Hariri, while referring to remarks last week by UN Syrian envoy Geir Pedersen that the constitutional committee talks could not continue “in such a way.”

“We want him [Pedersen] to be more frank in front of the Security Council,” he said in response to a question from Anadolu Agency, noting that the constitutional committee was formed on Russia’s suggestion in Astana.

“The ball is now in the Russian court,” he said.

Hariri said, “The solution inside Syria is to begin with that transitional government body…to establish that environment …to support the political process.”

The Syrian regime was mainly responsible for the huge failure in all of these processes.”

He expected the talks that ended last week to only resume in July after the regime conducts its own elections outside the UN mandate.

“So, the United Nations has to speak frankly about the side that is obstructing the process,” said Hariri.

“The solution inside Syria is, to begin with the transitional government body that will provide us with the freedom of movement to establish the full-trust environment that can enable Syrians to support the political process.

“Now we are wasting time focusing only on the constitutional committee,” he said, adding that the body is “blocking” and paralyzing the Syrian peace process.

Hariri said drafting a new constitution should take a maximum of six months.

“For the regime, the political process is just a tactic to waste time until it’s able to impose itself on the international community again. Is the world ready to go as it coexists with this tyrannical terrorist regime for another half-century?”

Hariri asked if the Syrian regime had changed any position without international pressure, citing its withdrawal from Lebanon and regarding the use of chemical weapons.

“The international community is required to assume its responsibilities towards this regime, including the crime of displacing 10 million Syrian citizens, killing about 1 million arresting and torturing hundreds of thousands,” he said.

He said that the responsible nations are required to activate the relevant article to ensure the political solution’s implementation based on UN Security Council Resolution 2254 and the action to ensure it is enacted.

This entails “strict international monitoring mechanism in which American, European, Arab and Turkish efforts are combined, without giving any opportunity for the regime to manipulate nor disrupt.”

Hariri said the Syrian opposition is in touch with the new US administration of President Joe Biden without naming individuals.

“The primary financial support for the regime is coming from Iran, and the second source is Russia, but we know Russia cannot pay forever, and that is why it is looking for a political solution,” he said.

“We think that in the [near] future, we will see new [developments] on the ground.”