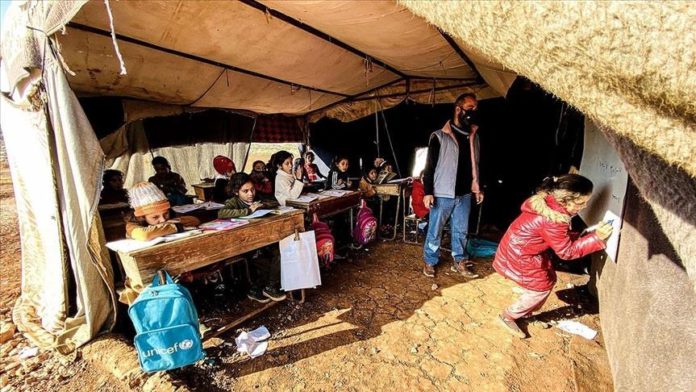 Syrian families who fled attacks by the Assad regime to take refuge in a camp in the northwestern Idlib province have turned their tents into part-time schools to enable their children to continue their education.

Since the beginning of the Syrian civil war in 2011, hundreds of schools have been damaged in regime attacks and have become unable to provide a place for education.

People who want their children to get an education are developing alternative methods. Residents of the Reyyan camp in a village in Idlib give their tents to students for four hours a day on weekdays.

“A total of 386 students, including 186 boys and 200 girls, get education in the tents,” Abdulqadir Basha, the school’s head, told Anadolu Agency.

“When we get cold, we try to warm our hands by rubbing them together,” said Muhammad Juma, a first grader.

Hundreds of thousands of people have been killed and displaced in Syria since 2011, when the Assad regime cracked down on pro-democracy protesters with unexpected ferocity.

Idlib falls within a de-escalation zone forged under an agreement between Turkey and Russia. The area has been the subject of multiple cease-fires which have been frequently violated by the Assad regime and its allies.

The influx of displaced civilians in recent years has increased its population to about 4 million.