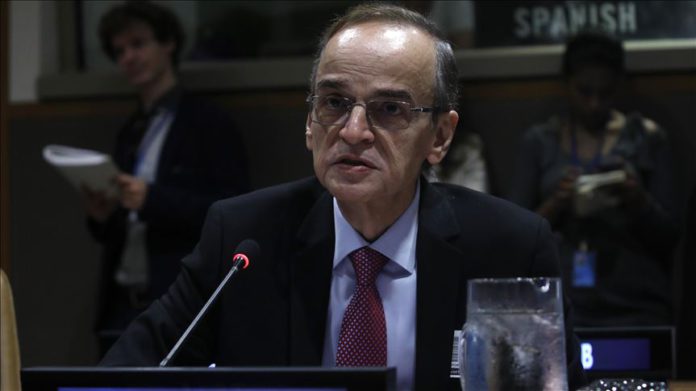 The co-chair representing the Syrian opposition suggested Tuesday peace talks could continue virtually after they were put on hold due to participants testing positive for the coronavirus.

“It is the only key solution to the Syrian tragedy,” said Hadi al Bahra from the Syria National Council (SNC).

He said that four and not three representatives, as reported earlier, at the talks which started Monday tested positive for COVID-19.

“During this time, we will continue our work with the representatives of SNC in the Constitutional Committee through virtual communication tools.

“We will discuss as well with the UN special envoy, Geir O. Pedersen, the possible options to pursue our work as soon as possible based on authorization from the medical authorities in Geneva,” said al Bahra.

Jennifer Fenton, the spokeswoman for the UN special envoy for Syria, said the talks are “on hold,” but did not elaborate on the format they might take.

The UN statement did not say which delegation among the 45 participants was found to have the virus, but opposition sources told Anadolu Agency they believed those who tested positive had come from Damascus, Syria’s capital.

“Having informed the Swiss authorities and the United Nations Office in Geneva, immediate measures have been taken consistent with protocols to mitigate any risks, and tracing of anyone who may have been in close contact with affected persons,” said the UN office.

The UN said all the committee members – 15 each from three delegations – were tested before they traveled to Geneva and again on arrival.

Ahmad Kuzbari, representing the Syrian regime, was not available for comment after the talks halted.