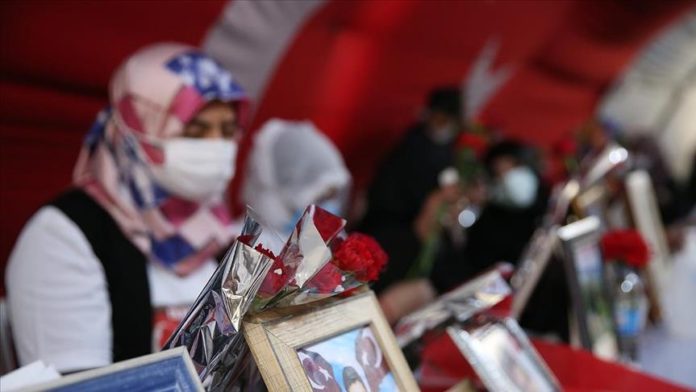 A Syrian mother on Saturday joined a sit-in protest of families against the PKK terror group in southeastern Turkey to reunite with her daughter abducted by the terrorists eight years ago.

Medine Erberkel, hailing from Syria, settled in Sanliurfa, a southeastern Turkish province bordering Syria, in 2013 after fleeing the home country when the YPG/PKK tried to recruit Neriman Ahmet, then 13-year-old daughter of the family.

However, despite all efforts, Ahmet was found to be abducted the terror group in 2013 after allegedly deceived by the local officials of the Peoples’ Democratic Party (HDP), which the Turkish government accuses of having links to the PKK.

Erberkel said that she was threatened and insulted when she went to the HDP’s district headquarters in Suruc to investigate what might have happened to her daughter.

Hoping for a reunion with Ahmet, she joined anti-PKK sit-in protest in Diyarbakir, another southeastern Turkish province.

Families of children abducted or forcibly recruited by the PKK terror group have been protesting for more than one and a half year, calling on their children to lay down arms and surrender to authorities.

Separately, Hamdiye and Emin Aslan from the southeastern Sirnak province, whose son Dogan was abducted by the terror group six years ago when he was only 14, spoke to Anadolu Agency to express their grief.

The parents said their son was forcibly recruited by the PKK six years ago, accusing the HDP for accomplice in it.

“While the HDP members send their own children abroad for study, making them civil servants, doctors, and engineers, they send children of poor people like us to mountains. I want my child back,” the mother cried.

They called on their son to lay down arms and surrender to Turkish security sources.

The protest outside the office of the HDP was started by three mothers on Sept. 3, 2019.

So far, at least 24 families have reunited with their children who fled the terror group and surrendered to Turkish security forces.

Offenders who are linked to terrorist groups and surrender are eligible for possible sentence reductions under a repentance law in Turkey.

In its more than 35-year terror campaign against Turkey, the PKK – listed as a terrorist organization by Turkey, the US, and the EU – has been responsible for the deaths of at least 40,000 people, including women, children, and infants. The YPG is the Syrian offshoot of the PKK.