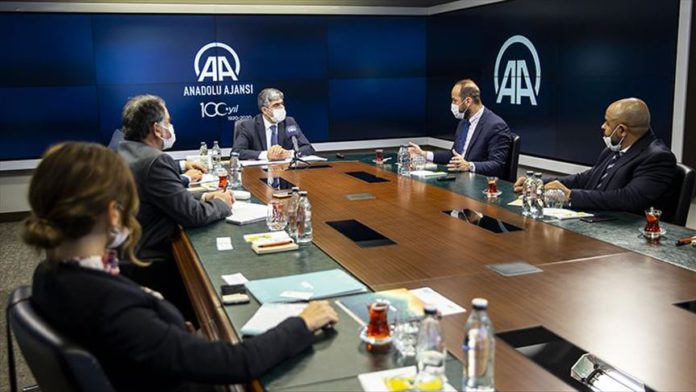 Hamza al-Mustapha, general manager of Turkey-based Syria TV, along with a delegation visited Anadolu Agency’s headquarters in Ankara on Thursday.

Broadcasting in 13 languages, including Turkish, Anadolu Agency is among the world’s prominent media outlets, Mutanoglu said.

“What distinguishes us from others is the contribution we make to humanity. We don’t discriminate based on races and religions. We too would like to benefit from your experiences,” said Mutanoglu.

“We will always stand for Syrians’ struggle for democracy. May your achievements be long-lasting,” he added.

Mustapha said his channel pursues an unbiased and non-discriminatory policy and aims to reach out to all Syrians.

The delegation was also briefed about operations of Anadolu Agency’s Syria Desk established in 2015.

Syria TV, established in 2018 and based in Istanbul, is under the umbrella of Qatar-based Fadaat Media Group and reaches out to the Arab world with a special focus on Syria.