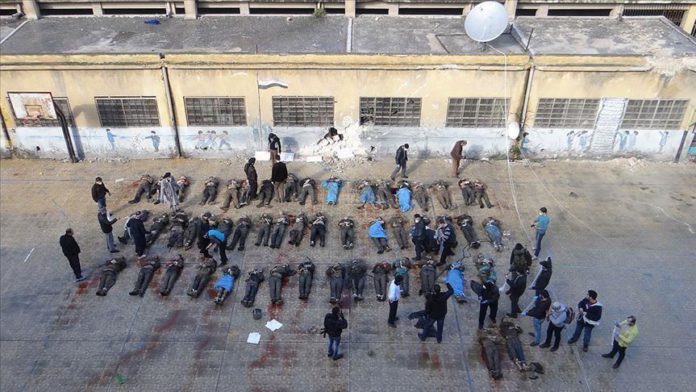 A Syrian man who saw a photo online of the moment his son was tortured and killed by the Bashar al-Assad regime died from a heart attack.

Nadir Abbud of Idlib province had not received any news from his son Yunus since the regime arrested him seven years ago.

The father confirmed the death of his missing son through photos shared on the internet.

Hundreds of thousands of Syrians searching for their relatives have stepped up their efforts after the US adopted the Caesar Act, a law which imposes sanctions on the Syrian regime for war crimes.

Families who have long given up on ever finding their relatives click on web links where photos of those killed in regime prisons are posted in a desperate attempt to confirm the deaths of their loved ones.

Imaduddin Rasit, the founding member of a France-based association monitoring Syrian casualties of war and prisoners, said more than 6,000 photos of people tortured to death have been shared on the internet.

The photos were first shared in March 2015.

He said their official web page was visited by nearly a million people following the implementation of the Caesar Act and more families were getting in touch with the association.

He noted that his association published up to 60 photos in February that had not been shared before, taking precautions in light of the sensitivity surrounding the issue.

The Caesar Act is named after a military forensic photographer codenamed “Caesar” who leaked photos of people tortured to death in Assad prisons in 2014. The act came into force as of June 17.

The photos taken by “Caesar” were first published by Anadolu Agency in 2014 and made a tremendous impact globally in the sense of proving the war crimes committed by the Assad regime, including the systematic torture and starving to death of prisoners.

On Dec. 18, 2019, the US Senate adopted a draft law envisaging additional sanctions on people and organizations aiding activities of the Assad regime and its supporters, including Russia and Iran.

On Dec. 21, US President Donald Trump signed the Caesar Syria Civilian Protection Act, which was included in the country’s 2020 defense budget.