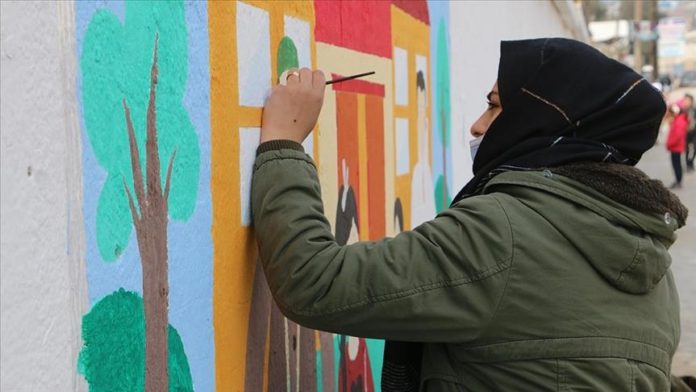 A group of Arab and Kurdish youth living in Afrin province in northwestern Syria adorns the walls of the city center with graffiti symbolizing fraternity, tolerance and peace.

Young people in Afrin turn the walls of their city, which was largely cleared of YPG/PKK terrorists in 2018 through Turkey’s anti-terror offensive Operation Olive Branch, into works of art.

The Afrin Local Council and some non-governmental organizations support these efforts of the volunteers, who come together under the name of “The Trail of Peace”.

Graffiti on the walls of the busiest streets of the city is also admired by the local residents.

“We decorate the streets with graffiti to show peace among the local people,” Beyazit Beyazit, one of the volunteers, told Anadolu Agency.

“As Arabs and Kurds, we make no distinction between us. Not only the walls but also the hearts refined with the graffiti we made,” said another volunteer, Sundus Fulfule.

In its more than 30-year terror campaign against Turkey, the PKK – listed as a terrorist organization by Turkey, the US, and the EU – is responsible for the deaths of nearly 40,000 people, including women, children and infants. The YPG is the PKK’s Syrian branch.

Pompeo says he had 'productive' talk with Turkey's FM