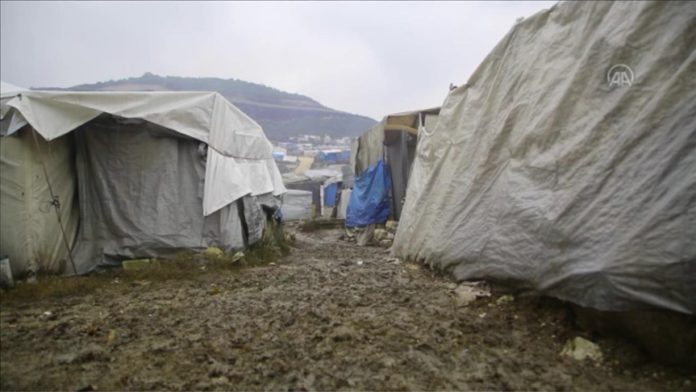 Turkmen families displaced due to attacks by the Syrian Bashar al-Assad regime are facing hardship in trying to provide winter clothes for their children and fuel for heating as the freezing weather sets in.

Families who left the predominantly Turkmen Bayirbucak region, located north of Latakia city, took shelter in a camp in the village of Kherbet Eljoz, west of Idlib.

Children shiver in the freezing cold as they walk in slippers or even barefoot.

Sabah Fual left her home amid the regime and Russian attacks and settled in the Turkmen camp. She told Anadolu Agency about the poor living conditions as the tents could not protect them from the rain.

“The people are miserable during the heavy rains. Mud covers everywhere,” she said.

She pointed out that they had to burn even their children’s clothes for heat as they lacked wood and fuel.

‘We need wood and a stove’

For his part, Hussein Abdullah, another displaced Turkmen, said: “We’re miserable from the heat in the summer and the cold in the winter. The children are sick.”

Children have to walk long distances to get to the nearest school, as there are none nearby.

“We’re going through difficult times. We need wood and a stove,” he added.

In May 2017, four de-escalation zones were designated in Idlib and some regions in neighboring provinces Latakia, Hama, and Aleppo as well as northern parts of Homs province, Eastern Ghouta region in the capital Damascus, Daraa and Quneitra cities by Turkey, Russia, and Iran in talks held in Kazakhstan’s capital Nur-Sultan, also known as the Astana process.

However, the regime and Iran-backed terrorists captured three of the four regions with Russian air support and headed towards Idlib. Talks in Sochi, Russia between Ankara and Moscow to consolidate the cease-fire agreement were held in September 2018.

However, Russia and regime forces began military operations to seize the entire region in May 2019 and captured several large residential areas within the Idlib de-escalation zone.

On March 5, Turkey and Russia held talks in Moscow and came to a new agreement.

The cease-fire, which regime forces have since occasionally violated, is largely intact. Since 2017, nearly 2 million civilians were forced to migrate to regions close to the Turkish border due to attacks by regime forces and Russia.