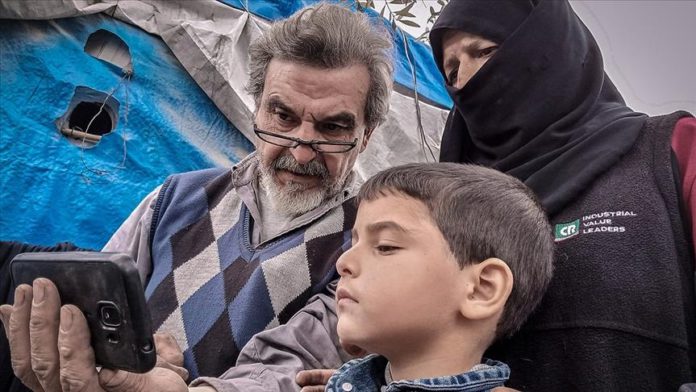 Evacuated Syrian civilians from the city of Aleppo long to return to their peaceful life before being forced to leave their homes due to besieging regime forces four years ago.

The Bashar al-Assad regime imposed a blockade on approximately 300,000 civilians in the eastern districts of the Aleppo city center for four months, in what was the worst humanitarian crisis caused by the near-decade of civil war.

The siege was lifted on Dec. 13, 2016 after Turkey’s initiative for a cease-fire.

Ankara and Moscow agreed to evacuate the local population, with convoys starting moving out of the area just two days after the truce was declared in movements that would last a week.

Some 45,000 civilians from Aleppo were settled in refugee camps in opposition-controlled areas in the neighboring Idlib province which is adjacent to the Turkish border.

Muhammad al-Amiri, who left his home in Aleppo four years ago and took refuge in the Samidun refugee camp in Idlib, told Anadolu Agency that they went hungry for two or three days during the siege.

“We couldn’t find bread. We bought a box of tahini halva for a car. We never forgot the sudden sorties of warplanes. We lived through very horrible moments that are difficult to describe,” he said.

“My family, relatives and neighbors have scattered. I don’t know anything about them. I cry when I remember the old days.” he said.

Amiri explained that he was struggling to survive in the camp and that the biggest challenge he faced was not being able to support his family.

People were able to take very few of their belongings, Amiri said, adding: “I couldn’t bring anything worth much with me, I only left with my dignity.”

Another displaced Aleppine, Bushra Haj Fares said many could not even leave their homes for fear of airstrikes while the blockade was in place.

She recounted that they had to move frequently due to the attacks in Aleppo. “My husband was going out to find food. We anxiously waited on the balcony until he came back.”

Fares said her only desire was to live in peace with her children.

“Thank God, we left safely with my children and my husband. This is the most precious thing for me,” she added.