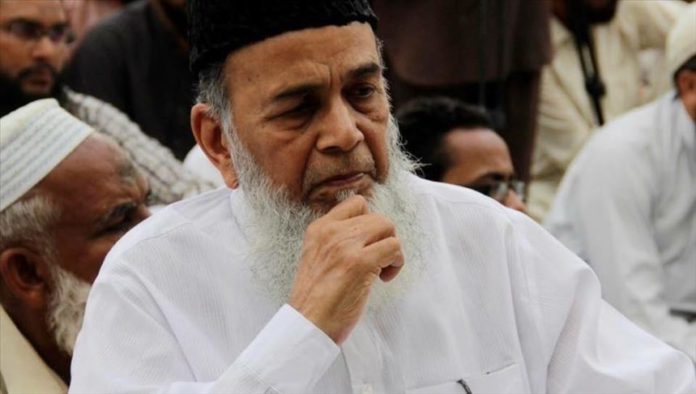 It was the year of 1960, when two friends and dashing student leaders switched their ideologies.

But their friendship did not take a hit from the swap. Instead, it further strengthened their bonds, according to Prof. Tauseef Ahmed Khan, a former NSF leader and a common friend.

“Munawar Hasan belonged to a rare breed of politicians who could go along with their ideological opponents. It is not the JI that has lost its leader but it is we [all] who have lost a great friend, a lettered personality, and a down-to earth politician,” Tauseef said while speaking to Anadolu Agency.

“I had had a decades-long association with him. At one point, we struggled for the same [socialist] cause, but later, he chose [to follow] the Islamic way of politics. But, it never took him away from me, and other [leftist] friends,” Haider said.

“We have lost a gem. May Allah accept his services he rendered for Islam,” he added.

Hassan pursued a tumultuous political journey that began with the philosophy of Karl Marx, Vladimir Lenin and Leon Trotsky but ended with that of renowned scholar Maulana Syed Abul A’ala Maududi.

Born in August 1941 in the Indian capital Delhi, days before Maududi founded the JI, Hasan migrated to Pakistan together with his parents in 1947 and settled in southern port city of Karachi.

He started his political career as a leader of the NSF in 1957. He got elected the NSF’s Karachi president in 1959. However, he took an ideological turn in 1960 and joined the IJT.

He served IJT in different capacities until he joined the mainstream politics in 1967. First as president of the IJT’s Karachi University unit in 1962, then president Karachi chapter in 1963, and finally central president in 1964. He is one of a few IJT presidents who got elected for the office for three consecutive terms.

Well-known for his eloquence, Hasan earned the reputation of an ace debater in Karachi’s political and literary circles. He possessed two master degrees — first in sociology and later in Islamic studies from the University of Karachi.

His first electoral appearance was in 1977 general elections, when he secured the highest number of votes from a constituency in Karachi. However, those elections were declared null and void by the former military ruler Gen. Zia-ul-Haq, who imposed a martial law in the country that lasted for next 11 years.

Hasan was elected the party’s Karachi chief in early 1980s until 1991 when he was appointed as the party’s deputy secretary general. He led the JI in Karachi during testing times.

Once a JI stronghold, Karachi, the country’s commercial capital, after 1985, fell for the Muhajir Qaumi Movement (MQM) — a linguistic party, which claimed to represent the Urdu-speaking migrants who moved to Pakistan with the partition of India in 1947 but has been accused of operating like an organized gang through its alleged use of violence and intimidation.

The MQM, which later renamed as Muttahida Qaumi Movement (United National Movement), reportedly targeted the JI workers in particular, who refused to budge in to the MQM’s political domination.

Dozens of JI workers were abducted and killed, while hundreds were tortured during 1985 to 2016 in Karachi. The JI blames MQM for abductions and killings.

“Munawar led the JI during such hard times when others had surrendered. He was such a courageous and brave leader who did not bow to the terrorism unleashed by the MQM against its political opponents,” Senator Haider opined.

Criticizing the MQM’s politics based on “hatred for other communities”, Hasan once proudly identified himself as a “real Muhajir”, who himself “migrated to Pakistan on his feet holding the finger of his father.”

In 1992, Hasan was appointed as the party’s secretary general by then emir Qazi Hussain Ahmed, and moved to northeastern Lahore city, where the party’s headquarters is located.

At one point, Hasan and his wife Ayesha Munawar served as the secretary general of the party’s men and women wings simultaneously.

He tried his luck in electoral politics for some more time but could not make it. He lost the 2002 elections to a MQM candidate from Karachi by a close margin.

Until 2009, Hasan continued to serve as the party’s secretary general — the second important office after the emir.

In 2008, he got elected the party’s fourth emir after Hussain refused to contest for another term due to health issues.

The outspoken Hasan found himself into controversy after his remarks on Pakistan army’s role in “the war on terror.” The remarks not only irked the army but also saw a widespread media campaign against him. Hasan, however, refused to withdraw his remarks.

Hasan is the JI’s only emir, which led the party for only one term contrary to his three predecessors, and a successor. After completing his first and last five-year term, he could not get elected for the second term in 2014.

The party chose then finance minister of northwestern Khyber Pakhtunkhawa province, Siraj-ul-Haq to lead the party. Many see Hasan’s controversial remarks as one of the key reasons behind not being elected for the second term.

However, he still remained a recipient of respect and honor not only from the party activists but the incumbent emir.

Hasan joined the JI’s research academy in Karachi, and engaged himself in literary and research work. But soon, he developed multiple age-related diseases, including Parkinson’s.

A few weeks ago, he was hospitalized in Karachi after his health deteriorated. He remained on life support system for several days and breathed his last on Friday.