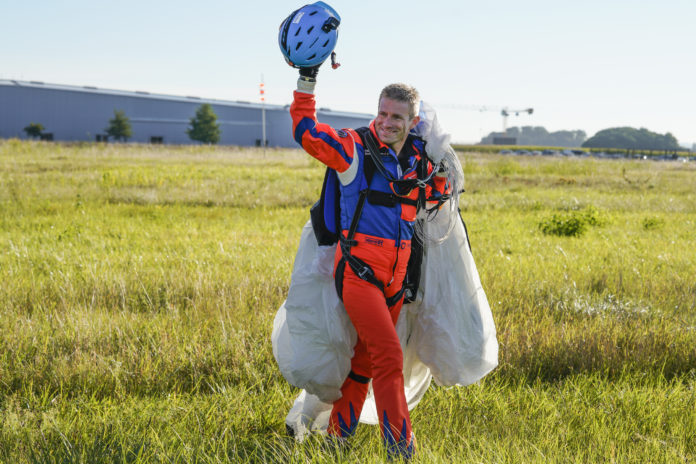 An experimental pilot in western Switzerland claimed on Tuesday to have made the first-ever jump from a solar-powered electric plane.

Raphael Domjan also made the first solar-powered free fall of all time from the SolarStratos plane with its massive solar-powered wings, said his communications manager Bernard Schopfer.

Exclusively powered by solar energy, the SolarStratos took off from Broyard airfield at Payerne in the Swiss canton of Vaud, neighbors Geneva at around 7:40 a.m. local time (0540GM).

Test pilot Miguel A. Iturmendi flew the plane, and Domjan, who initiated the aircraft project, did the jump.

“After a short climb and after reaching an altitude of 5,000 feet (1,520 meters), Raphaël Domjan threw himself into the void, freefalling several hundred meters and reaching a speed of more than 150 kilometers an hour [93 miles an hour] before landing in front of the team base and an array of guests,” said Schopfer.

He said that two world firsts were achieved during the historic flight.

Domjan made the first jump in history from an electric plane and also accomplished the first solar free fall without CO2 (carbon dioxide) emissions.

“We aim to demonstrate the potential of solar energy and electric mobility,” said Domjan.

“It is a message of hope for future generations: tomorrow, they will still be able to dream and carry out activities such as parachuting, for example, but without greenhouse gas emissions and in absolute silence.”

He said he had always been fascinated by aircraft and hopes that this will continue to make the young people of tomorrow dream, “thanks to aircraft that are more respectful of our planet and our climate.”

SolarStratos is the first commercial two-seater solar plane. It will also be the first crewed solar plane penetrating the stratosphere, and that could be as early as next week, weather permitting, said Schopfer.

“The aircraft aims to demonstrate that with today’s technologies, it is possible to achieve feats beyond the potential of fossil fuels: electric and solar vehicles are among the great challenges of the 21st century,” he said.