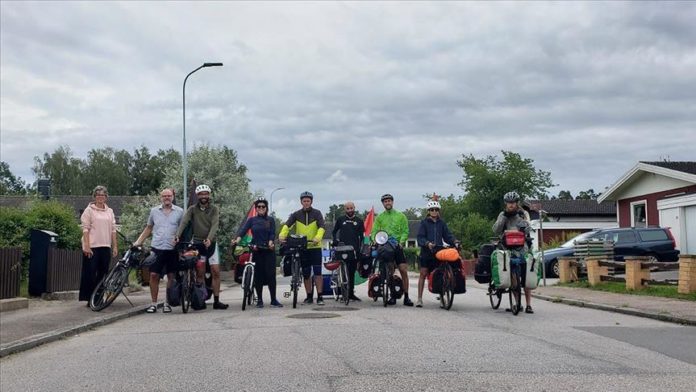 A Swedish activist is cycling 2,000 kilometers (1,242 miles) to raise funds for Palestinian children.

Benjamin Ladraa, on the eighth day of her journey, told Anadolu Agency that the campaign aimed at raising funds for 3,000 children in Palestine who have lost their limbs due to Israel’s attacks.

“We are helping them with prosthetic legs, rehabilitation and with mental health care through this fundraiser,” he added.

The bike ride started from the Swedish city of Gothenburg and will end in Abisko in Sweden, Ladraa said.

The campaign, Cycling for Gaza – Sweden is also a political statement in support of the Palestinian people, Ladraa added.

“We have people from Chile, from Romania, from Palestine, and we have Swedish people.

“Unfortunately, most of them are not very well informed about the situation in Palestine, but that gives us an opportunity to share the story of why do we have to help these children.”

He said that Turkey has a special role to put pressure on Israel to stop occupation and added: “We appreciate the support of every country, and I believe that we need very strong actions.”

“We need to boycott Israel, halt all the trade until they stop the occupation and release all the children from prisons and stop other war crimes.”

Laara said that they previously organized a project, which was a bike journey from Japan to West Sahara, aimed at raising awareness about Africa’s last colony, but postponed it due to the coronavirus outbreak.

The Swedish activist previously organized 11 months of Walk to Palestine campaign through 13 countries, but he was barred from entering Israel.