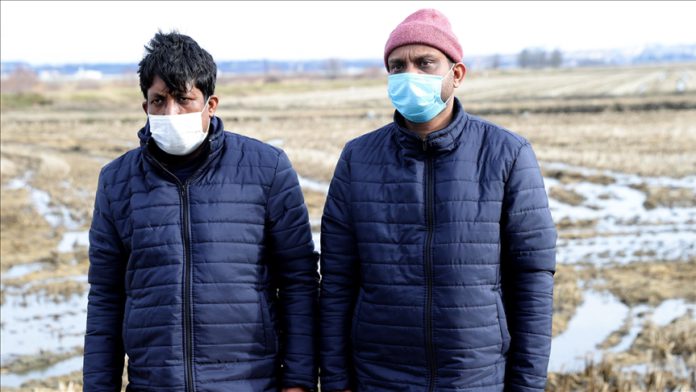 Four irregular migrants, who were lucky enough to survive the cold weather after being mistreated and pushed back by Greek authorities, have recalled their plight.

At least 19 irregular migrants were found frozen to death near the Greek-Turkish border after Greek border officials stripped them of their clothes and pushed them back to Turkish territory.

Riyaz A., a Bangladeshi national who is one of the survivors, told reporters that he is devastated by the loss of his friends and that they were mistreated by Greek authorities.

“They didn’t give us food or water for three days. We were not properly dressed for the weather, it was raining a lot. They pushed us back to Turkiye. Some of us moved fast (in Turkiye) while others took a rest. We did not rest, continued and found a vehicle. Then a Turkish soldier gave us shoes, coats, food. Because of this treatment we received, we survived,” he said.

The survivor said they want their voices be heard, and that irregular migrants should be treated humanely.

“We are human … the European Union sees and hears this. My friends died because they (Greece) pushed them back while they were wearing thin clothes. No country in the world treats migrants like this. We come from a poor place. We are not here to steal, we are here to work,” he said.

Muhammed T., another Bangladeshi national, also said that they were subjected to mistreatment in Greece.

Speaking to reporters, Syrian national Ahmed Mustafa said he started his journey to Europe, but was caught in Greece and imprisoned for four days.

“The beat us, tortured us. They treated us very badly. They have no mercy, they treat everyone badly. They sent us across the border to Turkiye and chased us with sticks. They sent back some of us naked. They also took our phones. May Allah be pleased with the Turkish soldiers, they gave us food and clothes,” he said.

In tears, another Syrian national, Enver Yilmaz, said Greek border officials stripped them of their clothes and beat them.

“They took us to a wet and cold prison. The blankets where we were staying were all wet. We froze. They treat women, children, everyone badly,” he said.

“They put us in boats like that (naked) and pushed back to the Turkish side. May Allah be pleased with the Turkish soldiers and Turkiye. They gave us shoes, clothes and food.”

On Thursday, Turkish authorities recovered the bodies of seven more migrants who were said to be pushed back by Greek border forces, raising the death toll from 12 on Wednesday.

According to Turkiye’s the migrants were found frozen to death in Edirne, which shares a border with Greece.

Meanwhile, Greek Migration and Asylum Minister Notis Mitarachi issued a statement on Twitter saying that the incident was a “tragedy.”

However, he denied that Greek forces had pushed them back into Turkiye, saying any suggestion otherwise “is patently false.”