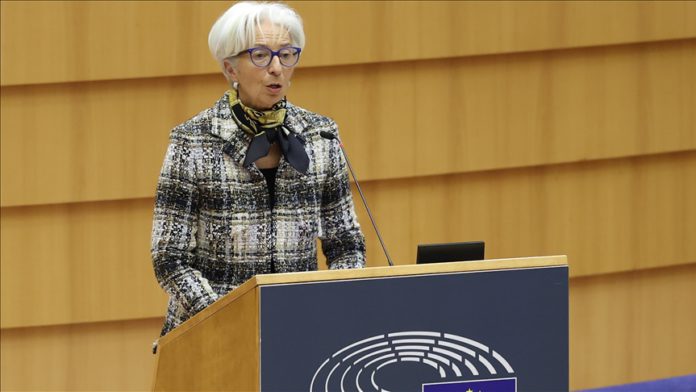 “Inflation is likely to remain high in the near term. Energy prices continue to be the main reason for the elevated rate of inflation,” Lagarde told the European Parliament’s Economic and Monetary Affairs Committee.

“Their direct impact accounted for over half of headline inflation in January, and energy costs are also pushing up prices across many sectors,” she added.

Lagarde said rising energy costs can drive up prices directly by increasing the cost of production, as well as indirectly by having second-round effects on wages.

“Uncertainties related to the pandemic have abated somewhat. At the same time, geopolitical tensions have increased, and persistently high costs of energy could exert a stronger than expected drag on consumption and investment,” she warned.

Risks to the inflation outlook are tilted to the upside, particularly in the near term, she added.

“Food prices have also increased, owing to seasonal factors, elevated transportation costs, and the higher price of fertilizers,” she said.

Euro area inflation has risen sharply in recent months, with the rate climbing to 5.1% in January, according to Eurostat.

Lagarde also stressed that the current omicron pandemic wave and its associated restrictions are likely to continue to have a negative impact on growth.

“Moderation in growth momentum has resulted mainly from the rapid spread of the omicron variant. The associated containment measures have dampened activity, particularly in consumer services such as travel, tourism, hospitality, and entertainment,” she said.

However, the economic impact of the current pandemic wave appears to be less damaging on activity than the previous ones, according to Lagarde.

“Bottlenecks will still persist for some time, but there are some signs that they may start to ease. This will allow the economy to pick up strongly later this year,” she said.

“Growth momentum was moderating (in November), but recent data confirmed that quarterly growth slowed to 0.3% in the final quarter of 2021, which still allowed gross domestic product to recover to its pre-pandemic level,” she added.

WHO sets up Ebola vaccination sites in DR Congo