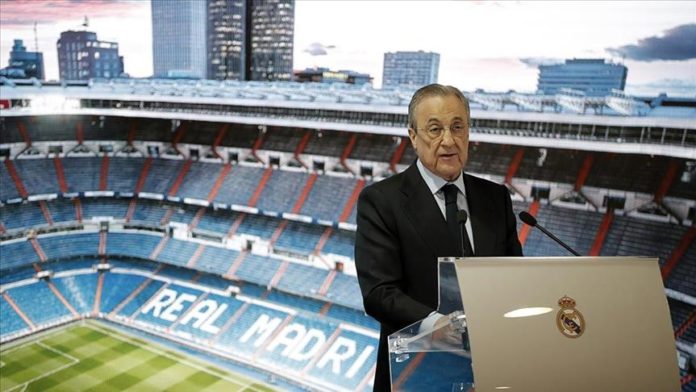 Florentino Perez told Spanish radio Cadena Ser that they will carry on working on the initiative, and said: “The project is on standby.”

Perez said none of the 12 founding clubs have left the Super League.

The 74-year-old warned the clubs, who said to quit this project.

“You cannot get out of the contract like this. They are binding contracts,” the Real Madrid chief said.

Perez noted that no clubs paid compensation for their exit even though they said they were leaving.

Barcelona and Real Madrid are still backing the project.

This week, Juventus said in a statement that the Italian club still believes in the “soundness of the project’s sport, commercial and legal premises” but accepts that there is a slight chance to complete the Super League with the current format.

These 12 European football clubs previously declared that they had founded the European Super League, an alternative mid-week tournament that FIFA, UEFA, and national member associations do not recognize.

Perez said they have been working on this project for three years.

“Maybe we didn’t explain it well, but they (UEFA and national football bodies) also didn’t give us an opportunity to explain it,” he added.

Perez put the blame on UEFA President Aleksander Ceferin for his “aggression” and said that the breakaway league was threatened as if they killed someone.

Last weekend, UEFA warned the Super League and said they will take all measures “to stop this cynical project.”

This project is based on “the self-interest of a few clubs” and they will think to take necessary measures to stop the project such as banning the clubs from the tournaments and players from their national teams in the competitions, added the UEFA statement.

This week, FIFA said the clubs who joined the Super League should bear the consequences. “If some elect to go their own way, then they must live with the consequences of their choices,” FIFA President Gianni Infantino said.

But Perez said that without the Super League project the clubs will lose at least €2 billion ($2.4 billion) so they must be in a hurry to block the upcoming financial problems.

He added that the money comes from challenging matches and big rivalries.

“Next season will be worse than this one,” he said, referring to the coronavirus pandemic’s negative effects on the game and clubs’ revenues, and adding that Real Madrid faced serious economic loss.

He also welcomes Turkish clubs for the Super League if they want to join it.

“Do Turkish clubs want to come? Let them come,” Perez said and added that there should be top-level matches in the breakaway league, without leaving anyone out.

One of the UEFA members, Turkey is opposing the European Super League.

Kasapoglu took to Twitter to criticize it, saying the project violates the “principle of participation,” which he said is a value of all sports organizations.

Separately, the TFF posted an online statement stressing its “deep concern” about the news of the breakaway league.

“We find this senseless attempt completely unacceptable as it will put the future of world football completely in danger,” it added.

*Writing by Can Erozden in Ankara