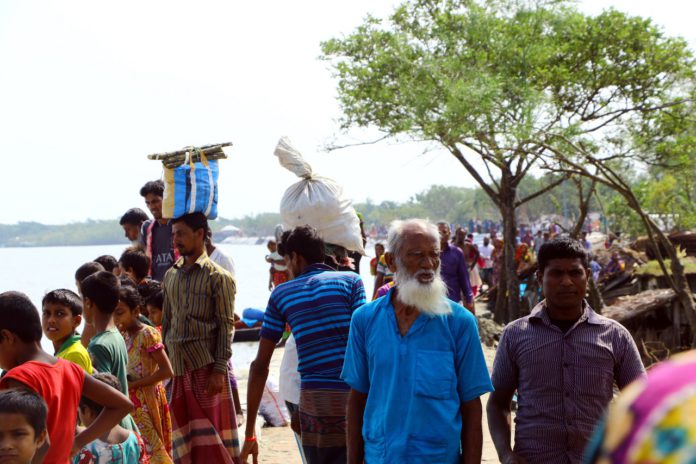 A rapidly intensifying super cyclone is moving across the Bay of Bengal and will likely sweep over coastal areas along the India-Bangladesh border by Wednesday evening, affecting millions of people, according to the meteorology departments of both countries.

The tropical cyclone — known as Amphan — has strengthened with maximum sustained winds of 265 kilometers (165 miles) per hour, which is equivalent to a super typhoon or a Category 5 hurricane.

It will hit at a time when both countries are struggling with the novel coronavirus pandemic, which has claimed a combined total of more than 3,500 lives from over 124,000 confirmed cases.

“We have been combatting natural disasters for decades in the South Asia belt and we are accustomed to it. But the case this year is totally different, as we are already fighting the global pandemic,” said Shah Kamal, secretary of Bangladesh’s Ministry of Disaster Management and Relief.

Amphan is the strongest tropical cyclone to occur in the Bay of Bengal and its probable landfall around the Ganges River Delta will threaten millions in northeast India and Bangladesh.

According to a local expert, the cyclone is capable of inflicting catastrophic damage in a heavily populated, low-lying area that has seen staggeringly high death tolls in past storms.

In 1991, a Category 5 Hurricane or super cyclonic storm in the south coastal region of Bangladesh killed an estimated 140,000 people and around 10 million lost their homes.

Kamal said 19 coastal districts out of 64 in Bangladesh will be affected by the cyclone.

“Thirteen of them will be severely affected,” he said.

“We have prepared over 12,000 shelters, more than double that in previous years, to shift over 2 million people, maintaining social distancing and other COVID-19 health guidelines,” he said, adding the use of masks by all is a must.

Urging people not to be afraid, he assured that everyone will be provided with dry food along with other essential items until the storm is over.

Experts, however, warned the government to take the issue seriously on different grounds as the cyclone is likely to cause flooding and massive waves.

“The cyclone is going to hit at the full moon. It means the height of the sea level will be more and it may inundate huge areas, causing massive damage to lives and property,” meteorologist Rezaul Karim Chowdhury told Anadolu Agency.

Pointing to the weak conditions of dams in many coastal areas of Bangladesh, he added: “Before every monsoon period, the government constructs coastal dams. But due to the coronavirus pandemic, it was not done this year.”

“There are vulnerabilities in many parts, and in case of any damage at any point by the pressure of high tide, it will be a great disaster,” he warned.

No tension for Rohingya

Meanwhile, Karim, who is also executive director of the Coast Trust NGO, which serves coastal destitute people, said the cyclone will not pass over Bangladesh’s southeastern district of Cox’s Bazar, which is home to more than one million Rohingya refugees.

“Cyclone Amphan will not attack Cox’s Bazar. So no tension for Rohingya,” he said.

India ready to rescue over a million people

Meanwhile, India is preparing to rescue over a million people, according to government sources.

“Cyclone Amphan has the potential to cause extensive damage in the coastal districts of West Bengal on its landfall by Wednesday,” said the government.

The Indian Meteorological Department has totally shut down boating and fishing activities in coastal areas of West Bengal and Odisha states.

“The NDRF is not taking Amphan lightly, as it is only the second time that India is facing a super cyclone,” said the force’s chief, SN Pradhan.